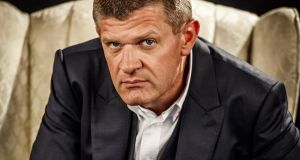 Majella reminds a chummy O’Connor of his cutting remarks about her husband. Photograph: Andres Poveda

In the first episode of Brendan O’Connor’s Time Out (RTÉ One, Friday, 9.35pm), a virtuously unadorned one-on-one chat show, the host interviews one half of “one of Ireland’s most famous couples” mostly about the other.

This is Majella O’Donnell, wife to Daniel, whose eventful life thus far is summarised in a couple of run-on sentences so vertiginous with detail O’Connor could be reviewing a rollercoaster.

“You had a busy career, you went through a marriage breakdown, you experienced severe depression and you were raising two children,” begins Brendan’s white-knuckle preamble. “Then in a bar in Tenerife everything changed when you met Ireland’s most eligible bachelor... Everything was going well until you got a shock diagnosis: you had breast cancer.”

O’Connor dispenses these details like a croupier dealing cards, and Majella clearly has a strong hand to play. But first he’d like to know how Daniel & Majella’s B&B Roadtrip came about.

It’s hard to say whether the question is intended as a softball, designed to ease Majella into a discussion of substance, or something more stealthy, a lever into why she put her relationship on view. But Majella, a fluent and confident speaker, is impervious to any tactic. “So, you’re not a control freak?” asks Brendan, nudging at her public persona. “Not in that respect,” she replies.

In respect to the interview, though, she is thoroughly in command. “You read my book, Brendan!” Majella interjects over one childhood detail. “You’re great!”

Majella has read the show too, gamely aware of what it needs from her. “I don’t want to go amateur psychologist with you,” Brendan says, before wondering if a stern, withholding father made her seek affirmation from difficult men. Majella entertains the notion and resists it. “It was down to me to change who I was if I was to meet the right person,” she says, refusing to be defined by men, even as the conversation keeps returning to one.

“I think he just thought I was good company,” Majella says of her first encounter with Daniel, “probably the way you think of me: she’s great for a chat.” She absolutely is.

Although O’Connor, refreshingly, intervenes rarely and succinctly, O’Donnell could be interviewing herself. The one curveball, in fact, comes from her, reminding a chummy O’Connor of his cutting remarks about her husband elsewhere. O’Connor almost loses his step, but the moment is revealing.

“I don’t feel as competent as I used to,” Majella says of her recuperation from cancer. The interview suggests otherwise. If Daniel and Brendan do see the same thing in Majella, she may see something similar in them. She’s well able to pierce the veneer of a smooth customer.