TV Review: The one radical moment in Monday night’s broadcast turns out to be a glitch 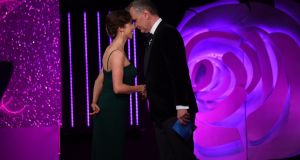 Not too long into the 59th edition of the Rose of Tralee International Festival 2018 (RTÉ One, Monday, 8pm) comes an unprecedented break with its polite tradition; a moment thrilling in its brazenness. A new contestant strides on stage directly towards host Daithí Ó Sé, a slab of man in a velvet tuxedo jacket, as we hear heavy breaths, muttered disbeliefs and one clear demand: “Can I have a drink?”

At last! Someone who feels the way I do.

Alas, this transpires to be a technical glitch: the previous contestant was recovering backstage from a vigorous step dance and her mic was still live. This had the uncanny effect of adding ventriloquy to Jolene McLoughlin’s list of talents as the New Zealand Rose, briefly at the expense of Yorkshire’s. Both women were from Donegal, though. It’s a small world.

At the Rose of Tralee, it is also an unchanging one. It is almost exactly 55 years since Martin Luther King gave his I Have a Dream speech, imagining the day his children “will not be judged by the colour of their skin, but by the content of their character.”

Four years earlier, Tralee had a dream too. This dream, conceived by local business owners, was that women would be judged specifically by the content of their character, not their looks, with some added appreciation for the quality of their party pieces. (And certainly not by the colour of their skin, which, until now, has been almost entirely the same. “A lot of people are focusing on the colour of your skin, rather than who you are,” Daithí says to the Waterford Rose, Kirsten Mate Maher, who is half-Zambian.)

The Rose of Tralee is intended to be an infinitely more honourable way to rate and rank women, inspired by the words of a song. “She was lovely and fair as the rose of the summer,” it goes, “Yet ‘twas not her beauty alone that won me; Oh no, ‘twas the truth in her eyes ever dawning.”

Those remain the standards of comeliness endorsed by the festival (providing contestants are unmarried and firmly under the age of 30): lovely and fair, smiling and listening, and – give or take a gay Rose, or a Rose championing reproductive rights – keeping their truths, ever dawning, in their eyes.

Roses can either comply with those lyrical diktats or resist them, arriving immaculately dressed to endure the sort of questions from Daithí that resemble a clumsy pickup attempt: “Are you finished college?”

Daithí speaks with one arm held aloft, like an aspirant opera singer, but with a voice so thick and muffled he could have swallowed his socks. At one point, deeply uncomfortable to be hoisted over the back of a power lifter Rose, he doesn’t even make a good deadweight.

The Roses parry his questions with the kind of responses you reserve for a determined job interview (“My masters is a top-up to my undergraduate in college.”). On that front, their professions run the gamut from nursing to physiotherapy to occupational therapy. Why the festival seems to attract those in the caring professions is hard to say, but considerateness seems to be an expected trait.

Over the first of two marathon broadcasts, warm respectful words are issued among the 18 contestants to parents and families cheering in the audience, siblings watching from around the world, and even their festival-appointed male escorts – god love ‘em.

Some Roses speak wistfully about returning home from abroad, others of preserving ties to the motherland for their emigrant parents.

More than one is asked about a lost parent, such as Shauna Ray Lacey, whose story is the most extraordinary: her father died from heart complications associated with his heroin addiction, and her mother overcame her own when she learned she would have a granddaughter.

Sarah Kate Mangan recalls her deceased father’s wish that she would one day be a Rose, and totes a purse that she says contains him.

Perhaps, like her, many of the women participate for the sake of others. Why else would they consent to the programme’s infantilising instinct to introduce them with a flicker of childhood photos, as though appealing to doting grandparents?

That means that the tradition will coast on, in service to diasporic sentiment and somnambulant pageantry. The Rose of Tralee remains a cultural curio – basic, badly dated, barely considered – and its broadcast feels as conservative a quirk of RTÉ as pausing for the Angelus: we don’t know why they still do it, we imagine it will one day disappear, but it’s always just been there.

At least there is one progressive bid this year for gender equality. At the end of another talent display, this one somehow involving competitive napkin folding, the Leitrim Rose deposits a folded bishop’s hat on Daithí’s head.

“Isn’t he lovely?” she asks the audience as he stared blankly into the camera. It was not his beauty alone that moved me, oh no, t’was the truth in his eyes ever dawning.