Rose of Tralee: ‘A misty-eyed drunk on a New York barstool’

Give Daithi a night off, and make it a show for real women who shop in Penneys, may be over 28, don’t want to marry and have opinions 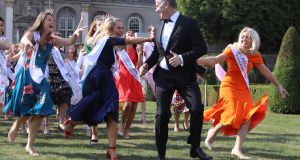 Like “fierce mild weather” or “soft Brexit”, the idea of a “woke Rose of Tralee” – one attuned to issues of modern social justice – is a bit of an oxymoron. We are, after all, talking about a contest which pits single twenty-something females against one another, and rates them on a specially-constructed scale of harmlessness-and-general-loveliness that runs the gamut from “Dana” to “Meghan Markle”.

The essence of its appeal is that it never, ever changes: it is as timeless as a Christmas cracker joke, as edgy as a pair of nude tights, as enduring as an Anglo trial.

No, it’s not a beauty contest, and yes, it celebrates accomplishment in all its forms – but there’s still something cloyingly saccharine and slightly nauseating about it all, like that slice of slightly stale Battenburg you really wish you hadn’t wolfed down for breakfast.

Note, for example, how nobody ever refers to the contestants as “women”. They are girls: girls with pleasant manners, good jobs, good hair and tinkling laughs that fire up on cue whenever Daithi unleashes one of his substantial arsenal of Dad jokes.

If one of them tries to even gently shake things up – as Sydney’s Brianna Parkins did in 2016, when she called for a referendum on repealing the 8th – well, she risks disappointing Mary Kennedy, and no-one wants that.

The world is moving on, but the Rose of Tralee is clinging doggedly to past glories. It is the misty-eyed and slightly maudlin drunk propped up on a New York barstool, still warbling about the home country long after closing time. It was founded in 1959, the first year women were allowed to join An Garda Siochána, and Darby O’Gill and the Little People was having its world premiere in Dublin. And for all its talk of empowerment and ambition and volunteering and gap years, it hasn’t changed much since.

The kindest thing to do is probably to take it into a darkened room and dispense a warm glass of milk laced with something just strong enough to put it quietly and permanently to rest. But still, we’re constantly being told it retains a special place in the national psyche.

So is there any hope of breathing new life into the festival and making it relevant for the post-MeToo era?

Well, the notion of a “woke” lovely girls contest is not entirely without precedent. At the recent Miss Peru 2018 competition, the contestants declined to perform the traditional recitation of their bust, hip and waist measurements, and instead recited statistics about violence against women.

Then the Miss America contest came out to announce it would no longer judge participants on beauty, and was scrapping its bikini section entirely – which, as an act of rebellion, is less doing a Rosa Parks, than failing to write your Auntie Florrie a thank-you card for the annual birthday tenner. But you have to start somewhere.

So can anything be done to shake up the Rose of Tralee for its 60th birthday?

And fewer lovely girls. The contestants are invariably presented as lovely, pleasant girls. Some of them probably are lovely, pleasant girls, at least some of the time. But that’s hardly all there is to them. Lovely is fine, but is that really what we want our young women to aspire to? When it comes to Lovely Girls and Nasty Women, who would you rather hang out with at a party? While Lovely Girl is playing Danny Boy on the tin whistle in the living room, Nasty Woman is in the kitchen telling filthy jokes and plotting to bring down the patriarchy, while she whips up a batch of her very special brownies.

Most of the greatest women I know didn’t even get going until they passed 38, didn’t hit their stride until their 40s, and were only peaking somewhere north of 58. Just ask Madonna. And yet the RoT deems us past it at 29.

And throw it open to proud non-virgins of all kinds: married women, divorced women, mothers, mothers-to-be, women who have had abortions and aren’t afraid to talk about it, women in happy relationships with other women, cohabiting women, women for whom “it’s complicated” doesn’t begin to describe their lives.

Make it more inclusive to gay women, transgender women, immigrant women, Traveller women, asylum-seeking women. By making the contest accepting of women with a range of life experiences, it will cease being an anodyne feast of hairspray, humblebragging and endless shout-outs to the boys and girls in rang a ceathair.

In a country which led the way in celebrating same-sex love, surely the Dome could withstand the minor earthquake of a few male Roses and female escorts?

No Irish woman under the age of 28, or 88, actually goes around at parties reciting 17-stanza poems about Delaney’s handsome donkey, or brides being hauled home to make poitín, surely. Where are the Roses whose special talent is locating the only Portaloo at festivals that still has toilet paper left? Or having once got off with a member of One Direction in Santa Ponsa? Or knowing how to apply tit tape and false lashes in a moving vehicle? Or being able to locate every mislaid gumshield, roll of Sellotape and pub serving a decent gin and tonic within a two-mile radius?

Stop asking the boyfriends when they’re going to put a ring on it. The rules state that the contestants must never have been married, which has given rise to the hilarious, 59-year-old, running gag that they’re all in it for the proposals. Every year, at least once, Daithi will fix some unfortunate in the audience with a gimlet stare and roar “any chance of making her an honest women” and everyone titters obligingly as his colour lights up the Dome, and no-one bothers to ask her whether she’s even interested in settling down with that stammering, weak-chinned, go-be-the-wall.

And the Christmas ornament jewellery and the high heels that make them look like Prom Night Barbie. Real women wear leopard print and leather and “This yoke? That’s only Penneys”.

9. Quiz them on their politics

Ever since Brianna Parkins’s bombshell, there’s been a repeated insistence that the Dome is no place for politics. But young women have opinions and views and the right to vote – why shouldn’t they be allowed to exercise them as loudly and publicly as they wish? And why shouldn’t the rest of us get the chance to hear them? As Parkins wrote in this paper: “If it doesn’t accept that women who enter will want to have political opinions then it risks being on the wrong side of history.”

The festival could look to the late, lamented Alternative Miss Ireland for inspiration, which once featured a special message recorded by Dolly Parton for Miss Panti. Even more memorable was the moment in 1998 when Miss Veda Beaux Reves – who had just lost first place to Miss Tampy Lilette – allegedly threw her Golden Briquette trophy at the judges in a tantrum.

On that note, why not give Daithi – now in his ninth year – a sabbatical and ask Miss Panti to handle the proceedings? Now that’s a Rose of Tralee I’d happily sit through.

Justin Bieber: Seasons – No bum. But he does seem terribly bummed out
5

The Lighthouse: Willem Dafoe is the best screen villain since Daniel Day Lewis
7