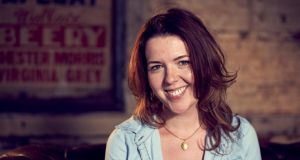 Lisa McGee, the writer and creator of Derry Girls, has been named one of the most powerful people in British television.

The hit Irish comedy series, which this year became the single most-watched TV programme in Northern Irish history, is Channel 4’s most-watched comedy since 2004. McGee also created the RTÉ drama Raw and a second Channel 4 comedy, London Irish, as well as working on the acclaimed BBC vampire drama Being Human.

McGee takes 11th place on Radio Times’s TV 100 2018 power list, which attempts to rank the on-screen and behind-the-scenes people who have had an exceptional past year in British television.

It is drawn up by dozens of actors and industry executives from major broadcasters and independent production companies, including Lenny Henry, ITV’s director of television, Kevin Lygo, and Amazon’s director of original TV, Georgia Brown. Radio Times editors choose the final ranking.

This year’s top spot is taken by the Broadchurch star Olivia Colman. The actor, who will star as Queen Elizabeth II in the next series of Netflix’s The Crown, rose to prominence in Channel 4’s Peep Show before her award-winning performances in Broadchurch and The Night Manager. She is also due to star in the BBC’s forthcoming Les Misérables drama and as Strawberry in an adaptation of Watership Down.

Chris Chibnall, the new Doctor Who showrunner, takes second place, while third place is shared by the siblings Daisy May Cooper and Charlie Cooper, the creators, writers and stars of the BBC comedy This Country, which parodies rural life.

Other stars who make the top 10 include Declan Donnelly, who is preparing to host I’m a Celebrity Get Me Out of Here without his long-time on-screen partner, Ant McPartlin, the BBC natural-history presenter David Attenborough, and the Luther star Idris Elba.

Hugh Grant is in seventh place, following praise for his performance in A Very English Scandal, one spot above Vanessa Kirby, who won a Bafta for her portrayal of Princess Margaret in The Crown. Benedict Cumberbatch, who is preparing to play the Brexit campaigner Dominic Cummings in a forthcoming Channel 4 drama, comes ninth, following his performance in Sky’s Patrick Melrose, while Nicola Walker comes a spot above McGee after appearing in The Split and Unforgotten.

The Power 100 also includes several other Irish names. Damian Kavanagh, the Dubliner who runs the online TV channel BBC Three, is at number 36, and Sharon Horgan, the writer, actor and television producer, is at number 54. She is followed, at number 55, by the Irish Canadian comedian Katherine Ryan.