Podcast of the Week: Nocturne – The Dream You Should Be Having

As in all great documentary, Vanessa Lowe offers perspective: here, it’s on the reasons people lie awake at night 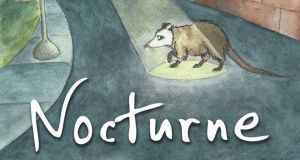 Nocturne: the subversion at play aids the Sleepless project, as nobody knows who the callers are, or who makes the videos, but there they are – they happen without ego

Among the endless library of podcasts, there is most definitely a large section dedicated to sleep. Meditation exercises, soft soundscapes, fairy tales read in whispered tones. Vanessa Lowe hosts Nocturne, a series about the workings of the world at night, about sleepers and the sleepless, about what happens after the sun sets and who we are in the dark. This particular episode, called The Dream You Should Be Having, looks at another creator who works in and around the sleeping, or unsleeping, hours, and what she chose to build using the knowledge that, on any given evening, millions of people just can’t sleep.

The project is called Sleepless, and it consists of a voicemail set up for folks to leave messages on when they can’t sleep. The voicemail is set up and managed by an anonymous young woman (whom Lowe agrees to call Audrey), and the audio is used in conjunction with imagery on Instagram to make microdocumentaries about the nature of sleeplessness. Some of the audio footage is admittedly a little grim – the reasons folks don’t sleep can be mundane and stressful but also deeply relatable. Audrey herself developed problems sleeping after a break-up and a concussion – she touches on how when we can’t sleep it’s often because we just don’t have anyone to talk to, or that we just need to say something to someone then we’ll be just fine. She imagined how many people in her building were lying awake, how many people on her block – all their problems are their own. From this the voicemail service was born.

Audrey uses archival film in her short videos, partially because the dated texture of the imagery has a dreamy, otherworldly quality. She says she wants to develop the dream the caller should be having, as the visuals play alongside the phonecall.

Nocturne: The Dream You Should Be Having

The project has its challenges: some of the callers leave distressing messages, as one would expect, which leaves Audrey with a strange burden. There’s an ethical quandary here: she’s not a therapist; she’s taking these strangers’ midnight confessions and turning them into art. But her own anonymity in a way protects her – and the callers. A strange kind of transaction is at play here, where the caller hands over the truth of their night, and in exchange she makes them a video, almost as a trade or thank you for their confession.

Audrey’s self-selected anonymity in the age of internet celebrity is fascinating, and her reasoning behind this is that she is in no way exploiting the late-night callers for her own gain. There’s something sacrificial about the project that feels uncommon in a time when makers are expected to be extremely public-facing in their work. A subversion is at play here that aids the project: nobody knows who the callers are, nobody knows who makes the videos – but there they are. They happen without ego.

Like all great pieces of documentary, it offers some perspective: many, many people lie awake at night, all for their own reasons. This episode has a few vulnerable, human moments – not least when Audrey describes how she ended up concussed – but also expresses something hopeful. Maybe the desperation that sleepless nights hold doesn’t have to be useless, maybe it can be turned into something beautiful.

Nocturne is here. The episode The Dream You Should Be Having is here

Corey Taylor: After 20 years in Slipknot we are all beat up
9 41 members of Sinn Fein ardchomhairle
10