TV Review: ‘What Are You Eating?’ is ultimately antagonistic towards veganism 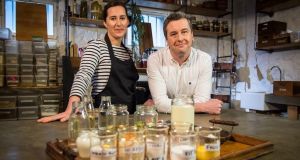 Aveeen Bannon and Philip Boucher-Hayes in What Are You Eating?

Philip Boucher-Hayes is back on a diet. Having explored Palaeolithic options and a high-protein regimen before, What Are You Eating? (RTÉ One, Thursday, 8pm) now turns its attentions to veganism, carefully plotting a month-long diet for Boucher-Hayes which he only selectively follows.

Viewers accustomed to ironic foreshadowing will note the advice of his dietary consultant who firmly advises Boucher-Hayes to take vitamin supplements. Nah, says Boucher- Hayes, later standing before a supermarket aisle crammed with them.

“I’ve decided it would be much more interesting to not take one and see what happens to my body,” he reasons, with the serious investigative spirit Morgan Spurlock once demonstrated before committing solely to McDonald’s. What could possibly go wrong?

If Boucher-Hayes never radiates any huge sincerity behind the undertaking, it’s partly a consequence of his reflex sententiousness (“So it’s not just about running away from meat and animal products, but running towards something else?”) and the hammy accentuations his voice acquires whenever he’s following a script, as though reading a child a bedtime story.

That can often come across as witty: “Hi, my name is Philip, and I’ve been vegan for nine days,” he says to the applause of the Vegan Dublin Food Tour, like a recovering meataholic, approving later of the “meaty texture” of a vegan substitute.

The meaty texture of the show is in the well-argued ethical objections of veganism’s adherents towards the awful conditions of intensive farming, and, daunted by that passion, the trepidation of its neophytes. “I see myself as a vegan,” says one vegan supply store employee, cautiously, as though in fear of reprisals.

Boucher-Hayes, however, is looking for the flesh of entertainment. How else can you interpret his retreat, before the diet is over, to an atavistic camp where they slice open a duck with flint and cook its innards by a fire? Within a programme about veganism, it is a needlessly antagonistic and shallow gesture, following in the spirit of Gerry Ryan’s “Lambo” provocations.

Putting his health at risk, losing muscle and even bone density for the lack of calories and his recommended supplements, Boucher-Hayes glibly rejects not just a vegan diet but its ideology. “It’s just the kind of omnivore I am,” he shrugs.

Good for you, Philip. Now get stuffed.