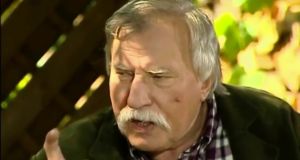 Gone be with the days of swapping Scrap Saturday tapes in the playground. Or struggling with the VCR to record the last episode of Father Ted. Or meeting an emissary from the Chechen mafia at midnight down by the docks to procure a rare bootleg copy of Tommy Tiernan on the Late Late Show. YouTube is the saviour of the Irish comedy connoisseur.

Thanks to an army of armchair archivists, almost any stand-up set or ancient sketch is available at the click of a mouse. Below are 10 of the funniest Irish videos, carefully curated to help distract from the impending apocalypse raging outside.

Your Bad Self: Golf Club
Watch here
Filled with brilliant recurring characters, like this unnecessarily shifty wheeler-dealer (played to a tee by Peter McDonald), or a petty criminal forced to repeatedly admit he’s from Bray, Your Bad Self was a short-lived RTÉ sketch show that was far funnier than anyone expected it to be. Although critics at the time were unimpressed, it has developed into something of a cult hit, with Jon Hamm and Sacha Baron Cohen among its many fans. All of which proves once and for all that you should never, ever (not even if your life depends on it), listen to a critic.

Maeve Higgins
Watch here
To take Maeve Higgins at face value would be to miss the point, or rather, miss the joke. It is now de rigueur for comedians to repeatedly batter audiences with endless tales and jokes of self-deprecation, usually in a cynical move to appear more likeable or God-forbid, “relatable”. When Higgins does it, nothing feels forced; there is honesty and more than a little slyness to her comedy that helps her jokes work on various levels. So when she talks about teaching a dog to say, “I love you, mama”, you can be sure it’s about more than just a funny voice.

Soupy Norman
Watch here
There are two ways of looking at this. You can either celebrate that arguably the greatest comedy ever produced by Irish television is available to watch on YouTube, or lament the fact that due to RTÉ’s chronic artistic conservatism, Soupy Norman remains such a rare jewel in the crown of our broadcasting history. A Polish soap opera re-dubbed to tell the story of a teenager from Buttevant who moves to Dublin for college, it is surreal, ridiculous and still unbelievably funny. Hats off to whoever commissioned this one.

RTÉ News: Award winning fake typing
Watch here
This is some Brass Eye-level stock footage. The comedy comes in the re-watching. How difficult is it to fake-type? Type anything! Maybe the man has never typed before, but how did nobody else notice how amazingly terrible it looks? Did they just not care? Perhaps not. Or perhaps someone did, and there is a mysterious editor out there we are all eternally indebted to.

Get Lucky (Angelus Edition)
Watch here
The Angelus set to the feel-good Daft Punk hit Get Lucky. It doesn’t sound funny. Give it time. Soon the mundane, uniquely Irish visuals and the wholly inappropriate music blend perfectly to create a mesmerising slice of Tim and Eric-esque surrealism. It’s most likely something only Irish people could find funny (does the Angelus even exist in this TV format anywhere else?), but it works because of the inherent strangeness already present. The idea itself isn’t strange (we could all use more time for quiet reflection), but the execution most surely is and the unexpected choice of song here merely highlights it.

Dylan Moran: City vs Countryside
Watch here
A chain-smoking, drinking, hyper-literate raconteur; Dylan Moran is the type of wild-haired local you expect tourists believe are ten-a-penny in Irish pubs. Is he the best stand-up comedian this country has ever produced? Questions like this are pointless and only serve to start an argument that can’t be won by either side. But yes, he is unquestionably the finest stand-up comedian of his (or any other) generation.

Man Falling on Ice
Watch here
Does this even count as comedy? Absolutely. Some poor sap falling down has been making people laugh since the days of Vaudeville, and this is one of the most spectacularly perfect falls in televisual history. The fact it has pervaded our social consciousness so deeply (is there anyone left who hasn’t watched it at least twice?) is proof of how slapstick can speak to us on a universally spiritual level.

Hugh Cooney: Accesorize Accesorise Accesorize
Watch here
2007 was an exciting time for Irish comedy; it felt like we were witnessing a new dawn. People like Hugh Cooney were churning out stuff so purposely far from the mainstream you couldn’t help but get excited. This video sums it all up neatly. Two women enjoy a perfectly banal conversation before things get very surreal and more than a little unsettling. The dream of a new dawn for Irish comedy never materialised, but at least we’ll always have beans spilling out of Maureen’s mouth.

The Den: What’s Snots
Watch here
If you’re having a rough day and need a little pick-me-up, we recommend immediate and repeated ocular absorption of the following video until symptoms improve. Nine out of 10 people report a marked increase of joy and comfort levels after as little as 30 seconds. For a whole generation of people this video is after-school nostalgia condensed. For everyone else, just soak up the chaotic wholesomeness and infectious laughter of one of the most re-watchable videos on YouTube.

Eleanor Tiernan: Before the Court
Watch here
If Eleanor Tiernan is not yet a household name, it’s only a matter of time. Having played the biggest comedy festivals around the world, as well as writing and starring in some great Irish TV and theatre productions over the past decade, it is in videos like this where her biggest strengths shine. With deadpan tone and perfect delivery she skewers the very particular and overly-descriptive style of news reportage of the courts. There are plenty more videos of this character from Irish Pictorial Weekly, all equally brilliant.