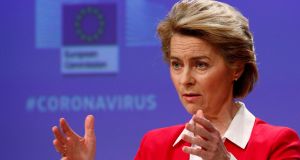 The head of the European Commission, Ursula von der Leyen, has urged European Union states to lift export bans on medicines to avoid causing shortages as it tackles the coronavirus crisis.

Half of EU states have designated long lists of drugs that cannot be exported during the coronavirus emergency. The lists include medication used to treat Covid-19 patients such as muscle relaxants, painkillers and hydroxychloroquine.

“We ask that national governments lift any export ban on medicines. Such restrictions can lead to shortages elsewhere in the EU,” Ms von der Leyen said in a statement. She also called on governments to avoid stockpiling.

Bans are usually justified with the need to fulfil national needs, but Europe has so far faced only limited supply problems from the coronavirus crisis.

Temporary shortages have been recorded mostly for drugs used to treat critically ill Covid-19 patients, such as anaesthetics, antibiotics and muscle relaxants that allow people to receive breathing support from ventilators.

But national lists comprise many more drugs, including some that have wider uses such as the painkiller paracetamol and insulin, used by diabetics.

Meanwhile, pharma giant Pfizer said on Thursday that early data has helped it identify a drug candidate with the potential to help treat patients infected with Covid-19. It also finalised a plan to develop a coronavirus vaccine in partnership with German drugmaker BioNTech and said the companies hope to produce millions of vaccines by the end of 2020. The companies said they plan to start trials of the vaccine as early as this month.

Data from preclinical studies of a compound that was originally developed to treat SARS – a different coronavirus that caused a major epidemic in 2003 – shows its potential to treat patients with the new coronavirus, Pfizer research chief Mikael Dolsten said.

Pfizer said it will conduct additional preclinical studies of the drug and aims to begin trials in humans in the third quarter of 2020. – Reuters

1 In six months we will be in the grip of a 1980s-style recession
2 Google facing $5bn lawsuit for tracking in ‘private’ mode
3 Apple tax case: Four individual lawyers paid over €500,000 each
4 Aer Lingus wants quarantine period axed to resume flights in July
5 Should my mam wait for house prices to drop before buying?
6 Dublin aircraft lessor defers delivery of Boeing 737 Max until 2025
7 C&C’s business ‘materially impacted’ as it books €92.5m in exceptional items
8 Parts of Brown Thomas and Arnotts to reopen next week
9 New Government should adopt housing commission to deliver homes for all
10 Pinterest seeks new office for Dublin EMEA headquarters expansion
Real news has value SUBSCRIBE