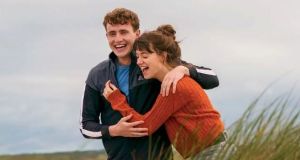 Rooney has adapted her coming-of-age book as a 12-part series, for the BBC and the streaming service Hulu, with the Irish playwright Mark O’Rowe and the English dramatist Alice Birch. It has been directed by the Oscar-nominated Irish film-maker Lenny Abrahamson and the English director Hettie Macdonald. Scenes have been filmed in Dublin, Sligo and Italy.

Marianne and Connell, the story’s two young people navigating adulthood in post-financial-crash Ireland, are played by the English Cold Feet actor Daisy Edgar-Jones and by Paul Mescal, the Irish actor familiar from the Gate Theatre’s promenade production of The Great Gatsby and the stage adaptation of Louise O’Neill’s Asking for It; it is his first television role.

Guiney and Abrahamson say Rooney had a big influence on the way Normal People looks on screen. “Sally was involved in all the early discussions about how many episodes, the format, conversations about actors, as well as reading various versions of the script,” says Guiney. “She contributed to them all; it was a full-blooded engagement.”

Abrahamson says he wanted to make “a very strong statement” with Normal People and it was Rooney’s original style and the story of young love that made him want to adapt it. “The territory is so interesting – it’s a positive account of two young people falling in love,” he says. “It sounds simple, but there’s a lot cynicism around that kind of material. It’s a look at intimacy in the 21st century and a portrait of a very tender relationship. It’s radical in a sense.”

Normal People will initially be available through BBC iPlayer in the UK and Hulu’s service in the United States.

‘How can we torment a bunch of millennial snowflakes and get away with it?’
7

Love Island: This pair are €60k richer. The rest of us feel much worse off
9