New comedy: ‘Cup your genitals and just hold them’ 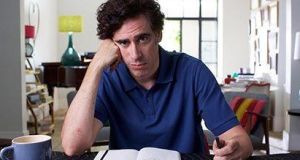 Comedy, like modern life, is full of new devices. The best example of one innovation that avoided gimmickry in recent years was Peep Show, a comedy that made a perfect joke of perspective. You watched the hapless flatmates Jez and Mark through each other’s eyes, plunged directly into their dilemmas as they plotted and failed, implored each other to walk out of a play (“No date is worth this”) or to eat a partly-incinerated dog.

Hang Ups (Wednesday, Channel 4, 10pm), a new comedy created by Stephen Mangan and Robert Delamere, based firmly on Lisa Kudrow’s US comedy Web Therapy, does something similar with a chaos of juddering points of view.

Here, though, devices are the device: the first glimpse we get of Mangan’s flailing therapist, Richard, is when his laptop screen flips up, and we watch him rumble through his home searching for a charger while the screen multiplies into several more modern frames.

A face appears in his door monitor; two young girls pose for a selfie, shimmering with Snapchat animations; his wife fields a Facetime call. Modern life is fidgety and everyone is on view.

The joke of the show, though, given a pleasing acceleration by director Delamere, is how superficial everything has become. With equal implausibility, both Richard’s supervisor and his loan shark check in with him by Skype. The intimacies of his marriage to Katherine Parkinson’s Karen are liberally shared with her PA. And, with hilarious efficiency, his patients seem to analyse themselves.

This is the programme’s other strong suit. Like Kudrow, who could populate her comedy with her Friends cohorts and dozens of celebrities, Mangan and Delamere really flaunt their pulling power. Celebrities pullulate across the screen in whipsmart cameos.

In the first episode the funniest belong to Sarah Hadland, as the robotically sexual Fiona, and Lolly Adefope’s Angie, a Millennial caricature keen to share her #positive experiences on Instagram. The starriest belong to Charles Dance as Richard’s father and Richard E. Grant, as Richard’s own unruffled if unconventional therapist. “Cup your genitals and just hold them,” he advises after a difficult encounter with his father. “How does that make you feel?” “Better,” admits Richard.

If the jokes are just the right side of inappropriate, so is the form. As faces peer right into yours, you can feel a little like one of Richard’s patients yourself. But the stronger sensation, in these paranoid times, is to feel more like a hacker, intercepting these private communications, fears and fantasies of others. That gives the comedy a doubly illicit pleasure, appealing to both voyeurs and exhibitionists alike, which – let’s face it – is everybody these days.

“All right mate,” says his wary loan shark, finally persuaded to come on board as a client. “I wouldn’t mind seeing what you can do.” My thoughts exactly. It looks like we’ve found a connection.

What have the Irish ever done for us? (More than you might think)
Real news has value SUBSCRIBE