Netflix: 10 of the best new shows and films to watch in November

Olivia Colman is the queen in The Crown, Timothée Chalamet stars in The King and Robert De Niro, Al Pacino and Joe Pesci team up in The Irishman 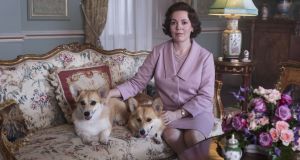 Olivia Colman as Queen Elizabeth in The Crown. Photograph: Netflix

Timothée Chalamet – aka The Internet’s Boyfriend – surrenders his trademark romantic curls for a serious bowl haircut in this moody historical drama. Based on Shakespeare’s Henriad trilogy, Chalamet plays Hal the carousing, boy-child and reluctant heir to the English throne. After the death of his father, Hal is forced to put away childish things as he is crowned King Henry V. The newly minted monarch must quickly attempt to extinguish the political chaos caused by his father, as well as developing allies in a court full of duplicitous, dubious characters ready to manipulate him.

With shades of David McKenzie’s brooding, macho war saga The Outlaw King, director David Michôd (Animal Kingdom) serves up a sombre sometimes brutal period piece, aided by a typically gruff supporting cast including Sean Harris, Ben Mendelsohn and Joel Edgerton. Luckily, a be-wigged Robert Pattison is on hand to lighten the mood with his turn as a scornful French Dauphin, passing the teen idol crown onto the reigning king, Chalamet.

Based on the Broadway play by Christopher Demos-Brown, American Son tells the story of Kendra Ellis-Connor (Kerry Washington) a distraught mother in a south Florida police station awaiting news about her missing teenage son, Jamal. The 90-minute piece sticks rigidly to its theatrical format, with most of the central story taking place in the station as the drama unfolds with racial tensions brought to the fore by the problematic attitude of junior officer Paul (Jeremy Jordan). Revolving around the four characters respective points of view, America Son uses familiar dramatic tropes in its attempts to grapple with the contemporary issue of the wave of police brutality against unarmed, young black men.

Konichiwa Queens! The Fab Five hit Tokyo to spice up the lives of four willing Japanese candidates who require the secrets of self-confidence, self-care and self-acceptance. With model/actress Kiko Mizhura and comedian Naomi Watanabe as their guides to Japanese culture, the fivesome learn a few new ideas to add to their list of guacamole-making, hair-swishing, house-building, hug-dispensing expertise.

The Devil Next Door

This new true-crime docu-series explores the notion of evil in our midst. An apparently unassuming Ukrainian grandfather, John Demjanjuk, was living a peaceful life in Cleveland before he was accused of being a notorious SS guard from the Treblinka concentration camp who was known as ‘Ivan the Terrible’. The five-part series documents Demjanjuk’s trial in Israel, where, confronted by his accusers, he protests his innocence with questions arising about his identity. This troubling ambiguity coupled with the desire to see those who eluded justice finally punished, makes The Devil Next Door an uneasy, complex watch.

The NBC Late Night host Seth Meyers presents his first comedy special for Netflix. The title is a somewhat affectionate tribute to Meyers’s second son, who was born in the lobby of his apartment building and who he says he will love just as much as a hospital baby “in time”. The special delves into the themes of family, fatherhood and relationships.

I’m With the Band: Nasty Cherry

Following her recent BBC 3 documentary about the ongoing struggles of women in music, pop polymath Charli XCX puts her prowess into action by assembling her very own Riot Grrrl-style outfit Nasty Cherry. I’m With the Band charts the journey of the group from the initial conception and formation to launching them into the unforgiving and oftentimes apathetic world of modern pop music with Charli acting as svengali and celebrity sage.

As Charli’s own progression within the industry has been a frustrating, elongated escapade and has yet to lead to complete world domination, the development of Nasty Cherry is a risky endeavour. Although, if anyone innately understands the pitfalls of trying to be a peerless pop idol, it’s the supremely talented Ms Charlotte Aitchison. I’m With the Band is a warts and all backstage pass into the world of the wannabes.

A Santa origin story of sorts, Klaus is the latest animated film from Despicable Me co-creator Sergio Pablos. Starring Jason Schwartzman as Jesper, an ineffectual postal worker, who after being banished to a small town above the Arctic Circle, convinces reclusive carpenter Klaus (J.K Simmons) to donate toys he has crafted for children to add to his dwindling deliveries. Their mission to spread joy within the gloomy town of Smeerensburg does not go unnoticed by some of the mean spirited locals, including the troublesome Mrs Krum (Joan Cusack), who attempts to call a halt to the cheerful proceedings. This sweet, seasonal buddy comedy has a classic Disney 2D animation feel that gives it an extra layer of warmth and familiarity that could make Klaus a Christmas classic.

Olivia Colman succeeds Claire Foy to the throne in the third season of Peter Morgan’s love letter to the monarchy. The times are a-changing according to the maudlin sub-John Lewis ad cover version that soundtracks the trailer as a montage of street riots, disgruntled binmen and angry miner’s wives waving their placards fill the screen. Covering the tumultuous 1960s and 1970s, this season sees the queen in crisis wondering how to adapt to this new era with Labour’s Harold Wilson in Downing Street and the growing unrest of her subjects.

Meanwhile within the palace, Princess Margaret’s (Helena Bonham-Carter) marriage to Lord Snowdon is violently disintegrating and young Charles (Josh O’Connor) has his head turned by one Camilla Shand (Emerald Fennell) and is about to fully understand the weight of his royal responsibilities.

An anthology series that’s based on Dolly Parton’s songbook, Heartstrings expands the tales of the characters within the classic tracks, from the peerless temptress Jolene to the heartbroken pregnant teen in Down from Dover. The eight episodes span different eras and cover a myriad of genres from melancholy love stories to comedy and family drama. Featuring stars such as Kathleen Turner, Ginnifer Goodwin and Melissa Leo – and with an appearance from the singer in each tale – it’s the Dollywood dream made into reality.

Martin Scorsese’s passion project about the life of Frank ‘The Irishman’ Sheeran and his relationship with longtime associate Jimmy Hoffa finally finds a home on Netflix. The epic biopic starring Robert De Niro as mob hitman/union official Sheeran and Al Pacino as the controversial union chief Hoffa is a story of betrayal and bloodshed unspooled through decades of violence and untold secrets. Using costly CGI technology, Scorsese turns back the clock to de-age his stars in various flashback sequences, smoothing out the lines to allow the same actors to play younger versions of themselves. What could be a distracting gimmick is actually imperative to the film, rather than hiring youthful stand-ins that might disrupt the continuity, he shows them slowly changing throughout a story that is closely focused on the concept of mortality and the melancholy state of growing older.

Reuniting De Niro with Scorsese stalwart Joe Pesci and Harvey Keitel, it’s a film about the passing of time and what is left after the bravado has dissolved and the memories are all that linger.