Meghan Markle: I was warned British tabloids would destroy my life

Royal says she never thought treatment ‘would be easy, but I thought it would be fair’ 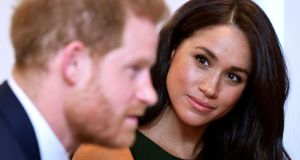 Meghan Markle: ‘It’s not enough just to survive something, right? That’s not the point of life. You’ve got to thrive. You’ve got to feel happy.’ Photograph: Toby Melville/Pool/AFP via Getty

Meghan Markle, the duchess of Sussex, has revealed she was warned before she married Prince Harry that UK tabloids would “destroy” her life, as she spoke of struggling to cope with the reality of being part of the British royal family.

In an interview for last night’s ITV documentary Harry & Meghan: An African Journey, she said the last year had been “hard” and that she had had “no idea” of what she would face.

“When I first met my now husband, my friends were really happy because I was so happy. But my British friends said to me: ‘I’m sure he’s great. But you shouldn’t do it because the British tabloids will destroy your life,’” she told the interviewer, Tom Bradby, in the film.

When people are saying things that are just untrue, and are being told they are untrue but they’re still allowed to say them, I don’t know anybody that would feel that’s okay

She said she had “very naively” told her friends: “What are you talking about? That doesn’t make any sense. I’m not in the tabloids.” She added: “I didn’t get it. So, it’s been complicated.”

Meghan was speaking during the couple’s recent tour of southern Africa, during which it was announced she was suing the Mail on Sunday over an allegation that it unlawfully published a private letter she sent to her estranged father, Thomas Markle.

At the same time Harry issued a ferocious attack on the British tabloids, accusing them of a “ruthless” campaign against Meghan. Harry also issued legal proceedings against the owners of the Sun and the Daily Mirror over alleged phone hacking. He told Bradby he would not be bullied by sections of the media “into playing a game that killed my mum”.

Meghan appeared close to tears as she spoke of coping with the pressure, particularly after the birth of their first child, Archie. “It’s a very real thing to be going through behind the scenes,” she said. “The biggest thing that I know is that I never thought it would be easy, but I thought it would be fair. And that’s the part that’s really hard to reconcile.”

Asked if she could cope with the pressure, she said: “I have said for a long time to H – that’s what I call him – it’s not enough just to survive something, right? That’s not the point of life. You’ve got to thrive. You’ve got to feel happy.”

She said she had “really tried” to adopt the “British sensibility of stiff upper lip” but thought that “what that does internally is probably damaging”. The couple took things one day at a time, she added.

Asked if the counterargument was that incredible power, privilege, fame and wealth came with scrutiny, she said: “That completely tracks for me if things are fair.” But, she said, “when people are saying things that are just untrue, and are being told they are untrue but they’re still allowed to say them, I don’t know anybody in the world that would feel that’s okay.

“And that’s different to scrutiny… It’s a really different beast. I think the grass is always greener – you have no idea – it’s really hard to understand what it’s like. I know what it seems like it should be. It’s a very different thing. That’s okay. The good thing is I have my baby and my husband, and they’re the best.”

Bradby, who has been a friend of Harry’s for 20 years, said the strain the 35-year-old royal was under was increasingly clear. Harry admitted he had to constantly manage the pressure. Speaking of the death of his mother, Diana, princess of Wales, he said: “And now I have a family to protect, so everything that she [Diana] went through, and what happened to her is incredibly raw, every single day. And that’s not me being paranoid. That’s just me not wanting a repeat of the past.

“And if anybody else knew what I knew, be it a father, be it a husband, be it anyone, they would probably be doing exactly what I’m doing as well.”

He added: “But again for me, and for my wife, of course there is a lot of stuff that hurts, especially when the majority of it is untrue. But we need to focus on being real, and focus on being the people that we are, and standing up for what we believe in.”

Harry also addressed a reported rift between him and his brother, the duke of Cambridge, claims of which emerged when he and Meghan broke away from the Cambridges to set up their own private office away from Kensington Palace, in Buckingham Palace.

Asked if such reports were true, Harry said: “Part of this role, and part of this job, and this family being under the pressure that it’s under, [is that] inevitably stuff happens. But, look, we’re brothers. We will always be brothers. We are certainly on different paths at the moment… We don’t see each other as much as we used to because we’re so busy.

“But I love him dearly, and the majority of the stuff is created out of nothing. But, as brothers, you have good days, you have bad days.” – Guardian