Watchmen: a dark alternative-history of America for the here and now

TV review: Once the cultishly-revered comic bible for misfit adolescents is transformed in new TV show 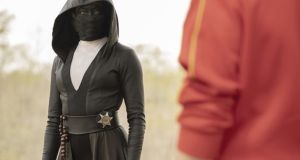 Watchmen: “Something much more than an effort to keep fans ticking over.” Photograph: HBO/Sky Atlantic

The answer to that question, traditionally, has been an audience who feel instinctively at home with dense, blood-spattered detail, loquacious nihilism and an alternative reality of chewed-up superheroes and moral degradation that feels simultaneously fantastical and miserable. In short, the Watchmen were watched by misfit adolescents (of all ages). A cultishly revered work that has already been the subject of a lavishly terrible 2009 movie, that makes it a slightly risky prospect for a prestige HBO show.

The saturnine Moore, who disowns most salutes at his output, has automatically renounced this continuation by Lost and The Leftovers genius Damon Lindelof. Watchmen (Sky Atlantic, Monday, 2am & 9pm) hardly disowns Moore, though, as faithful to his convoluted history as it is stealthy with clever visual references. But the cheering surprise is how it has matured his concepts for both a different medium and a different moment.

Where the comic fixated on the Cold War, in a world where the US had decisively won the Vietnam war and a popular Nixon never got impeached, the TV show focuses on a brewing race war, in a country under the shadow of an existential threat, where society is perpetually on edge. Take away Redford, and the everyday nuisance of raining squid showers, and that alternative doesn’t seem quite so far-fetched.

Our focus is Angela Abar (a cracking Regina King) who enshrouds herself in a leather habit and hood as Sister Night, one of the ultra-violent good guys. “I got a nose for white supremacy,” she says of a suspect, “and he smells like bleach.” Besides Johnson’s enjoyably rakish sheriff, she is assisted in interrogations by a laconic cop known as Looking Glass (the excellent Tim Blake Nelson), so called because his mask is a mirror, which his colleagues use to straighten their uniforms. No conceit here is too stuffy to withstand a prick of humour.

What you see reflected in Watchmen, likewise, is a blend of wit and anxiety, used to address both its audience and its source material. In one of Lindelof’s sly self-reflexive jokes, the history of the original superhero vigilantes, the Minutemen, is parcelled in a breathless TV show called American Hero Story, full of lurid spectacle and Moore-level overwriting. It also comes with a lengthy warning of “graphic language, violence, nudity, misogyny, racism, anti-Semitism…”

This version of Watchmen is hardly immune to such septic charms: if the all-out, flesh gouging assault on a cattle ranch populated by alt-right terrorists in Rorshach masks doesn’t excite you, Nicole Kassell’s lacerating direction and the surging electro of Trent Reznor and Atticus Ross’s soundtrack surely will.

But Watchmen, like Lindelof’s masterful The Leftovers, is willing to go deeper than its set pieces and – as episodes progress, and Jeremy Irons and Jean Smart arrive – much, much weirder. It finds solid characters behind every mask as it does so, building on the foundations of its source material while staying supple enough to withstand tremors. It results in something much more than an effort to keep fans ticking over: there’s every reason to watch Watchmen.