From German Expressionism to Irish Modernism: art exhibitions for 2018 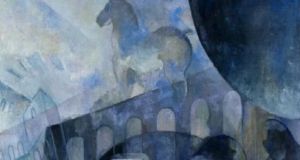 As we look apprehensively into 2018, the Model in Sligo (from January 13th) isn’t trying to lull us into a false sense of security. The year there kicks off with I stared at beauty so much: Waiting for the Barbarians, a 2013 film by Joana Hadjithomas and Khalil Joreige that offers an unsettling portrait of Beirut, from panoramic views to tiny details.

Their title references CP Cavafy’s poem. These days, say the artists, “there is the impression of a breach opening underneath our feet and the fear of being swallowed by the impossible present and the uncertain future”.

In the same general area, Brian Maguire’s War Changes its Address: The Aleppo Paintings, (IMMA from January 26th) draws on the artist’s 2017 visit to Syria, prompted by his dismay at the plight of refugees from the conflict there. At the Project, Amsterdam-based Nicoline van Harskamp’s Englishes (from February 15th), using interviews, performance and fictional episodes suggests that the English language has become many different Englishes, by virtue of the modified forms of the language spoken by non-natives. Limerick’s City Art Gallery has a Charles Harper survey show (from February), spanning a long career as both painter and teacher.

The National Gallery of Ireland enjoyed a fantastic 2017. Can it keep the momentum going? Possibly so. It’s harbinger of spring is a major Emil Nolde (1867-1956) exhibition of works on loan from the Nolde Foundation Seebüll, Germany, in cooperation with the Scottish National Gallery of Modern Art (from February 14th). Associated with German Expressionism, Nolde was an independent spirit with strong religious and mystical convictions. He began as a wood-carver, which may have contributed to the roughhewn, incisive character of his paintings and graphic work. Add a fearless colour sense and you have a potent mix.

2018 is the 50th anniversary of the death of Alfred Chester Beatty. The Chester Beatty pays tribute with a special programme of events and there will be a special issue of postage stamps in recognition of Beatty’s generosity to the Irish people. Miniature Masterpieces (Chester Beatty Library from March) focuses on the celebrated 14th century Coëtivy Book of Hours, commissioned by Prigent de Coëtivy, bibliophile and Admiral of France, on the occasion of his marriage. In the autumn, Treasures of the World will feature highlights from the library’s extraordinary collections.

Mappa Mundi (IMMA from March 24th) is the first major Irish show by British artist Frank Bowling. Born in British Guiana in 1934, Bowling studied art in England but veered away from Pop Art into a personalised form of abstraction. Brian O’Doherty – the artist formerly known as Patrick Ireland, an alter ego put to rest 10 years ago at a ceremony at Imma – is featured in There is no thing here but much else (Crawford Art Gallery, Cork from March 2nd) and then Language in Line: The Structural Plays and other works (Imma from April 26th) an exhibition celebrating his lifelong dedication to drawing as it related to Ogham.

It’a a busy year for Alice Maher. A film project with Aideen Barry should premiere at the Cork Film Festival 2018. Vox Materia, a solo show of new work is at the Source Arts Centre, Thurles, Co Tipperary (from March 29th, and later in the year at the Crawford Gallery Cork). Inspired by a 12th century carving of a mermaid at Kilcoole Abbey, it includes a new sculptural installation and a Parallel Editions suite of woodblock prints. Soon afterwards, via her involvement in the Repeal the 8th Amendment artists’ campaign, she is one of many artists in Eva 2018 (multiple venues in Limerick, from April 14th).

The 38th Eva is curated by the highly regarded, Colombian-born Inti Guerrero, who brings a broad, inclusive vision and an awareness of the importance of history, local and global. Eva has a way of drawing commitment beyond the call of duty from curators, artists and workers, and Guerrero’s Eva should be something special.

In June, Project hosts Jesse Jones’ multimedia installation, with which she represented Ireland at the 2017 Venice Biennale. Tremble Tremble sets about re-imagining feminist history and law – she describes it as a “bewitching” of the judicial system.

The National Gallery of Ireland’s summer highlight (from July 18th) is Between Paris and Pont-Aven: Roderic O’Conor and the Moderns, a major survey of Ireland’s own Post-Impressionist, focusing on the years 1887 to 1895, in the context of works by his contemporaries Van Gogh, Gauguin, Armand Seguin, Cuno Amiel and more.

At Imma (from August 10th), Sunset, Sunrise is a 40-year survey of the work of the prominent Iranian artist Monir Shahroudy Farmanfarmaian, who built her reputation in New York in the 1960s and 1970s. Turner Prize-winning German photographic artist Wolfgang Tillmans has his first Irish solo show (Imma from October 26th). From fashion to conceptualism and abstracts that consider the basic processes of photography, his work is casual, unpredictable and widely liked.

Also in the autumn (from the same date), Imma turns its attention to Mary Swanzy, “Ireland’s first Modernist painter”, with the first substantial show of her colourful, eclectic, experimental work since 1968, promising a chance to reassess her reputation.

Coinciding with Swanzy, the National Gallery considers representations of Countess Markievicz on the centenary of the formation of the First Dáil, in a show curated by Donal Maguire, exploring her complex, “enigmatic” identity “in paintings, photography, illustration and film”.

Canaletto is indelibly associated with Venice and was really better than anyone else at capturing the spirit of the city. This loan exhibition, curated by Anne Hodge at the National Gallery of Ireland (from December 5th) featuring work by him and other Venetian artists from the UK’s Royal Collection – which is exceptionally rich in Canalettos. George III acquired the works from the then British Consul in Venice, Joseph Smith, who happened to be Canaletto’s “most enthusiastic patron” and an avid collector and art dealer.

The Fall of the Second Republic review: A fitting portrayal of political disarray
6

Patrick Freyne on Love Is Blind: It’s Gilead, Love Island and Blind Date rolled into one
10