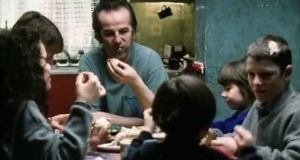 Family: Ballymun was chosen ‘because it’s an internationally recognisable landscape’ for a story that could happen in any city

Twenty-five years ago this month something significant happened on Irish television that wasn’t Riverdance. Over four weeks in May 1994, the country was transfixed by Family, Roddy Doyle’s series starring Sean McGinley as violent abuser Charlo Spencer and Ger Ryan as his wife, Paula.

The airwaves and newspaper pages were full of debates on what the series meant. Was it a realistic portrayal of the domestic violence happening behind closed doors across Ireland? Did it unfairly malign working-class Dubliners? Was it yet another slur on the many decent people who lived in Ballymun, where it was shot? You can see some of this discussed in The Late Late Show debate at the time which RTÉ’s excellent archive site posted recently.

The differing reactions on either side of the Irish Sea were interesting. In the UK, where Family was broadcast by the BBC, the series was seen a little differently. Guardian TV critic Nancy Banks-Smith wrote that Family “will wipe the Eurovision smile off Dublin’s face” and Tony Parsons described Charlo as a “Yosser Hughes for the 1990s”, referring to the antihero of Boys From the Blackstuff, Alan Bleasdale’s bleak 1980s depiction of life under Thatcherism.

“The horrors depicted in Family may have a generic root in modern Western society, but they always have both roots and branches in the societies in which they emerge,” wrote Irish Times columnist John Waters, reacting to Parsons’s Yosser Hughes comparison. “I suspect that the reason this local dimension has been glossed over in Family has to do with the fact that, for all RTÉ’s attempts to pretend otherwise, this is essentially a BBC production.”

There was some truth to this. Although notionally a BBC-RTÉ co-production, Family was commissioned, developed and largely financed by the BBC. One can see it as one part of a long story of British talent and money taking advantage of a vacuum left by a systems failure in Irish public service broadcasting. However, Waters failed to acknowledge that Roddy Doyle himself in his fiction and drama has never shown much interest in framing his stories in this locally specific way. On the contrary, on The Late Late Show, he talked about the choice of Ballymun as being “because it’s an internationally recognisable landscape” for a story that could happen in any city.

TV is often described as a writer’s medium, but Family is not Doyle’s alone. A lot of its power derives from the performances and from what were then radical techniques – handheld camera, fast cutting, shifting points of view from episode to episode. Director Michael Winterbottom has gone on to a long career as a restless cinematic innovator. He had come to Family from directing Love Lies Bleeding, written by another Irish writer, Ronan Bennett, who became a major force in British TV.

Around the same time, before he was made famous by Trainspotting, Slumdog Millionaire and the London Olympics, Danny Boyle was producing dramas in Ireland based on work by John McGahern and Frank McGuinness. Boyle also produced Elephant, a terse, unblinking masterpiece by the great Alan Clarke, which is still a contender for the best film made about the Troubles. Boyle, Bennett, Winterbottom and Clarke were all allowed to explore the possibilities of their craft by a welcoming environment in BBC Northern Ireland’s drama department. No such department existed in RTÉ at the time.

We hear a lot these days about the current Golden Age of TV drama, with the implication that there was nothing much of value in the past. That may be true of US TV, but not of the complex and multi-layered story of television in this part of the world. Unfortunately, there’s been a weird flattening out of the popular historical record. If it’s ever referenced at all outside of film and media studies departments, TV’s past is rendered as a nostalgia product, high on kitsch and sugary childhood memories but low on the sometimes brilliant, intellectually challenging, occasionally problematic work that spurred such strong reactions from audiences at the time.

The good news is you can find all four episodes of Family without too much difficulty on YouTube (the picture and sound quality is a little variable). It stands up remarkably well a quarter of a century on, and you can see the enormous influence it has had on later dramas such as Love/Hate. Among other things, it features the single most shocking, exhilarating cathartic shot in the history of Irish TV; the crunch of cast iron on bone when Paula’s frying pan makes contact with Charlo’s head. Take that, Riverdance.

A Very British History: ‘I heard chants supporting the IRA. My blood boiled’
10