Patrick Freyne: it’s amazing how mundane tasks can be enlivened by a time limit and dramatic music 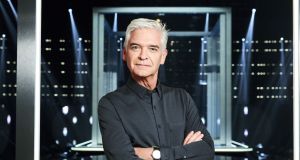 “Enter the Cube! at your own risk: Philip Schofield on The Million Pound Cube. Photograph: ITV

In The Million Pound Cube (Monday-Friday, Virgin Media One), ordinary members of the British public are made to obey the dictates of a beloved and wealthy geometrical shape while they are standing within it.

Lurking adjacent to the Cube is elderly boy genius Philip Schofield, his hair now white because of the things he has seen in both the perspex box and, I suppose, light entertainment in general.

On This Morning alongside Holly Willoughby, Schofield has a certain amount of authority. But he is not in charge here and if the comforting Willoughby is present then she has somehow transformed into a huge and demanding perspex cube. Look, I don’t know her. That’s possibly something she can do.

In this context, Schofield is Flavor Flav to the Cube’s Chuck D and he spends the programme bigging up the Cube and catering to its whims while repeatedly reminding contestants and the audience at home how little control he has over the Cube.

It’s amazing how mundane tasks can be enlivened by a time limit and dramatic music. We’re all cubists now

“Enter the Cube!” he says ominously, at the outset of Tuesday’s episode. And before long one half of a pair of twins is wearing a mask without eyeholes and failing to follow instructions in the giant clear plastic box while Schofield makes gurning faces of horror. We’ve all had that dream. They win no money. Schofield shakes his head sadly. “That’s the Cube for you. It will dangle [prizes] in front of you and then suddenly when it looks like it’s being generous it will snatch it all away.”

He knows the Cube too well. As the twins are dragged away by the guards (I’m just presuming this is how it works, I don’t actually see this), more contestants are pushed forward. They are childhood friends Joe and Robert. Schofield asks what they make of the Cube now they are in its presence. They are suitably in awe. Robert, in particular, has long worshiped the Cube.

“Do you think you have what it takes, Joe and Robert, to beat the Cube?” Schofield asks mournfully.

“I wouldn’t be here if I didn’t think I could beat the Cube,” says Joe.

“Wash your mouth out with soap, Joe!” I shout from my couch. “Speaking like that in front of the Cube.”

The tests the Cube has set for Robert and Joe are the type of pointlessly abstracted Sisyphean tasks ushered in by Henry Ford and which now dominate capitalism in its late, decadent and final stage. Anyone who works for a big company is asked to do bizarre and pointless crap all the time. I’ve a friend who works for a tech multinational and when he explains his job to me he might as well be saying: “I do seemingly random puzzles for a large needy perspex cube while an elderly white-haired infant makes faces nearby.”

“What are the points for that in UCD?” feels like the only reasonable response, and if I know The Irish Times readership, several of you are already calling the grind schools.

And so it is that Joe and Robert have to swiftly remove white plastic sheathes from a row of cylinders. And they must pick up and place 50 red balls that have been dropped on the floor from a plastic container. And they must throw another ball through a letterbox-sized opening. All while exciting music plays. It’s amazing how mundane tasks can be enlivened by a time limit and dramatic music. We’re all cubists now.

Each time Joe and Robert fail, they lose a “life”. Each time they succeed they win a cash prize, for the Cube is generous in its way.

But it’s stressful. Soon Joe and Robert’s youthful enthusiasm has been replaced by stress and despair. As they attempt their final task, flinging cards from a table to the floor very quickly (something a baby might do, but with money at stake), they recall the carefree lives they used to have, in the olden days, 10 minutes before.

“This is what the Cube does every single time,” says Schofield, shaking his head and trying to not cry.

Joe and Robert are relatively lucky. The Cube looks kindly on their derring-do and pluck in the face of pointless labour and they leave Schofield’s presence with £100,000 in cash money which, endearingly, they plan to use for community-based projects before Britain finally collapses into a barter system. The credits roll as Schofield weeps. Produced by The Cube. Directed by The Cube. Gaffer: The Cube. Best Boy: The Cube.

Over on BBC1, in contrast to this brave new cuboid world, a hairy animal is rolling around in its own filth scratching its belly. Ah, tis yourself!

Okay, it’s actually a badger or a “floor panda” depending on what part of Ireland you’re from (all black and white animals are related and if I was a 19th-century naturalist, rich men would give me money to write about this). Autumnwatch (Tuesday-Friday, BBC2) is back to remind us of the glory of nature or more accurately, for many of us, that “outdoors” exists. I peer through a gap in my curtain. “Oh yeah!”

I love Autumnwatch. Argumentative deer butt antlers. Red squirrels squat in bird boxes because they’re mad bastards. Michaela Strachan does a dance. A reintroduced pine marten eats custard creams. Gillian Burke wanders bird-infested wetlands where once there were beautiful coal mines. Huge congregations of red knots gather by a lake, not one of them wearing a face mask because they don’t believe in the virus. Some ingenious seals make smaller seals from fluff (I’m a bit vague on seal biology).

A fox is filmed opening milk bottles with its teeth to steal milk. A rabbit commits credit-card fraud. A chaffinch robs a car (the last two might not be true). Some seals fight one another. Or, more specifically: “Bulls come on to the island to compete for the right to mate with the females.” Yeah, I know the deal. I grew up in a small town.

Autumnwatch is as joyous and uplifting an experience as ever, featuring beautifully filmed vistas, educational factoids as well as endearing nature enthusiasts. Who needs big cash prizes when all this nature is out there to be discovered? Oh dear, I’d better stop now. I think the Cube heard me.