Go back to Dublin with yourself Dermot Bannon. We’re grand here in the dark 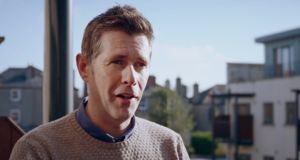 Watching Simon Schama extol the wonders of both the Italian Renaissance and the art of the great Mogul emperors on BBC Two’s Civilisations this week, I wonder vaguely what he will say about the great extension builders of early 21st-century Ireland when he gets to it (presumably in the finale).

Looking at Irish history from the perspective of ancient estate agents (and what other perspective is there?), the Hibernian historical landscape is certainly up and coming, and littered with “potential”. Newgrange is, thanks to the people who rebuilt it in the 1970s, a well-appointed bungalow that gets the sun in the morning but could do with an en suite. The prehistoric fort of Dún Aonghasa is fashionably open plan, and it does have an en suite (the ocean is nature’s en suite), but it’s sadly devoid of storage space, underfloor heating, a roof or decent broadband.

Ireland itself is, in a sense, an extension, historically treated as a nice new conservatory by the Brits, with its fourth province not so much a green field as a room to improve. There was even a Dermot keen to do some remodelling back in the old day (Dermot MacMurrough).

The lot of man might well improve, ‘Room to Improve’ says, but largely because we’ve put in some new windows and a bit of dry lining

Basically we are genetically programmed to like Room to Improve. It is our culture’s small-C version of Civilisations and the nearest RTÉ gets to statement television. As its title suggests, it engages in a sort of modest Irish incrementalism at odds with any of the grand teleological narratives that nearby empires might tinker with. The lot of man might well improve, it says, but largely because we’ve put in some new windows and a bit of dry lining. The enlightenment is what happens because of a well-placed skylight.

The 11th series of Room to Improve ends this weekend, although the franchise itself will never end. I hope to be reviewing Room to Improve annually until the day I die, at which point a robot Dermot Bannon (a DermBot, if you will) will no doubt be arguing about the correct location for a space sarcophagus or jewel-embossed laser turret in an orbiting satellite/underground bunker.

The penultimate episode (last Sunday, RTÉ One) is a classic. Dermot is faced with his worst enemy, farm folk who have no truck with his metropolitan notions. Bigger windows? An open-plan kitchen-cum-diningroom? Natural light? Would you go back to Dublin with yourself, we’re grand here in the dark. Over the course of the show, china-collecting teacher Katie and taciturn farmer Pádraig slowly drive Dermot to the brink of madness.

But let’s go back to the beginning. Every Room to Improve has a few classic set pieces. First there’s the planning bit that finishes with them sitting down to agree the cost of the renovation. Working out the cost of a renovation is filthy sex stuff for the Irish people, and around the country we all wear away this bit of the videotape, rewinding and replaying it. (Everyone records Room to Improve on video.)

This weekend’s preplanning has a touch of sadomasochism to it, with Katie deciding that Dermot’s plans get “zero out of 10”. Dermot is appalled and brings this slight up at every opportunity. “You have to admit that those first drawings were not your best work,” Katie says later.

Pádraig mentions that his favourite cow has the same name as Katie’s sister, proving, once again, that simple Freudianism is no match for us Irish

Dermot decides to try to learn about his hosts. He goes out with Pádraig on to the farm in overalls, disguised like emperors of yore. The cows just think he’s a normal person. Stupid cows. But he gives the game away. Confused by anything that isn’t a form of extension, Dermot likens Pádraig’s herd to Katie’s chinaware collection, as though Pádraig is an eccentric aficionado of bovine collectibles and not a farmer with a job. (In an aside, Pádraig mentions that his favourite cow, coincidentally, has the same name as Katie’s sister, proving, once again, that simple Freudianism is no match for us Irish.)

Then Katie takes Dermot to see her mother, a former “Calor Kosangas housewife of the year, which is what we used to call our leaders before we had the word taoiseach. She fills Dermot with cake and confuses him with an even more extensive china collection.

Eventually the builders start ripping the house down, as a metaphor for what Katie and Pádraig are doing to Dermot’s sense of self. We all hold our breath in erotic excitement and hope they find a serious structural problem and have to recalculate the costs. Sadly, this doesn’t happen, but they do find a difference of opinion. Katie and Pádraig want a wall dividing the kitchen and the diningroom, and Dermot Bannon hates walls and loves windows and natural light. His ideal home is a greenhouse on the surface of the sun, and someday, by God, he’s going to build it. Katie and Pádraig’s ideal home, in contrast, is their farmhouse looking more or less the same, except deep underground and filled with china cabinets.

Dermot repressing his rage is my favourite thing on television. One day he’s going to snap, and RTÉ is going to have another big internal inquiry, but until then we’ll get gems like “It doesn’t really matter to me . . . I’ll drive down that lane and I’ll never have to see that wall again.” What he means, of course, is, “**** you and your ****ing wall. I’ll stand in the ruins of your lives and turn your farmhouse into a freestanding modernist umbrella if I ****ing choose. I’m Dermot Bannon, bitches!”

Sorry, what did you say there, Dermot? I was just thinking about how much I hate windows and natural light

Sadly for Dermot, Katie has the measure of him. She just looks at him with mild pity, as though he is a local character whom they have permitted to wear a hard hat and pretend is an architect. She tells him that the colour of the window frames is wrong. She accidentally douses him with water from a shower when visiting a showhouse. And so, over the course of the programme, Dermot slowly spirals into an existential crisis. If his opinion is irrelevant, then he’s irrelevant, he says to the camera, and you’re a better person than I am if you don’t respond from your couch with, “Sorry, what did you say there, Dermot? I was just thinking about how much I hate windows and natural light.”

Anyway, it’s all building towards a twist ending in which it’s revealed that Dermot Bannon had been a ghost the whole time, like Nicole Kidman in The Others or Bruce Willis in Live Free or Die Hard. But then, ultimately, everyone admits that the house does look pretty good, and Dermot tries to convince Katie that maybe he had something to do with this and tries to convince himself that he does, in fact, exist. “I’ll give him 10 out of 10, but don’t tell him,” Katie says to the camera, clearly happy that she has destroyed a man.

Then there’s a party and a speech, and someone mentions how the whole project came in on budget, which is, for the Irish, a statement that’s usually followed by lying back in bed and lighting a cigarette.