TV review: An average show elevated by the performances of Grant and Nicole Kidman 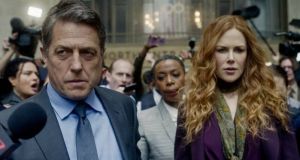 The Undoing (Sky Atlantic, Monday) only really works because it stars Hugh Grant as a charming doctor with a hint of something darker beneath. He’s the quietly smarmy agent of chaos in what otherwise feels like a coast-swapping, note-for-note cover version by Nicole Kidman and producer David E Kelley of their guilty pleasure hit, Big Little Lies. It’s Big Little Lies II: Bigger and Lie..er?

Its milieu is Upper West Side Manhattan, which is portrayed as an empty millionaire’s playground. The grit in the ointment is the murder of a new mother at the exclusive school to where smug power-couple Jonathan (Grant) and Grace (Kidman) Fraser send their underwhelming offspring (Noah Jupe).

The victim, Elena Alves (Matilda de Angelis), was poor and her son is attending $50,000 Reardon on a scholarship. This is an excuse for Kelley, adapting Jean Hanff Korelitz’s 2014 bestseller You Should Have Known, to regurgitate Big Little Lies’ sledgehammer observation that the rich are both detestable in their entitlement and oblivious to how awful they are. Elena sees through them – but they can’t see she is doing so.

The exception is Grace, who is haunted by the sexuality Elena displays when she walks up to her naked in a changing room. Grace is one of Manhattan’s most exclusive psychotherapists. But she’s the one who looks like she’s keeping a guilty secret when she learns of Elena’s brutal killing. And she is: shortly before a distressed Elena fled a school fundraiser she planted a more-than-platonic kiss on Grace’s lips. Something was clearly simmering between them. But what, and where might it have led?

Not that she would anyway, but Grace can’t confide in Jonathan as the unctuous oncologist is out of town at a conference (which will please Grace’s low-key disapproving father, portrayed by Donald Sutherland). Why, then, has he left his phone at home? And how is that Grace can’t reach him at any of the hotels where he should be staying? Here we circle back around to Grant’s simmering knavery. He’s a charmer from the start – but with a twinkle of malice.

A broader actor would tip their hat too soon. Grant, though, is wonderfully inscrutable as he cycles through his greatest hits and alights upon the preening caddishness hinted at in his Richard Curtis films and front and centre in Paddington 2.

Even as the credits roll it’s unclear what Jittery Jonathan is up to. It’s that mystery, rather than the plodding murder plot, that drives The Undoing. This is an average show elevated by excellent performances (Kidman is supernaturally buttoned-down, showing even less of herself than Grant).

And just like Big Little Lies there is the option of setting the story to one side and luxuriating in the amoral fabulousness of the lifestyles on display – knowing, all the while, that a terrible reckoning is about to blow in and carve a trail of devastation from which not even Jonathan’s smirk may emerge intact.