People of the Year awards honour Irish ‘ledgebags’ of 2018

Irish Coast Guard, Tuam historian and people of Ballaghaderreen among the winners 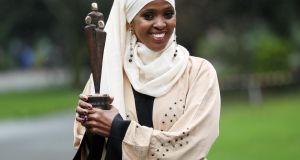 Ifrah Ahmed, International Person of the Year at the People of the Year Awards. Photograph. Robbie Reynolds

The Beast from the East is, when you think about it, a suitably titled nemesis for The People of the Year. The 43rd so-titled awards show was among many events postponed due to that mischievous, self-aggrandising icecapade back in March.

Ironically, that snowstorm allowed more opportunities for altruism in our communities and the event was rescheduled to Sunday (RTÉ1) this week. So, in your face, weather.

Awards ceremonies are, in general, very similar. The Oscars, The Iftas, The Dentist of the Year Awards, Ireland’s Most Unpleasant Business Moguls and Crufts (the Oscars but with dogs) all blend together into a mush of industry self-congratulation (except for Crufts. Sorry Crufts – you’re brilliant!).

They usually provide opportunity to see self-important people who have already been amply rewarded by life having their egos inflated further. “You like me! You truly like me!” they declare before floating skyward powered by their own windy self-regard.

Which is why the People of the Year Awards are so refreshing. The title might even lead you to believe you were in with a chance of winning a prize yourself. “I’m a people!” you shout to your spouse. “Perhaps someone has observed me peopling and has nominated me for an award?”

It’s possible. Maybe the judges noted your “performance” at that all-you-can-eat Chinese buffet last Tuesday, for example, or that “humorous” and “sexy” dance you did during that team building exercise. Sadly for you, however, many of the People of the Year award winners have saved lives, battled hardships, built movements and generally reduced the sum of human misery on the planet.

Even as I type this, I know you’re thinking, “Yeah but I don’t see the angle? How do they profit from these schemes?”

Well, sit down for a minute, take a deep breath and consider this: they don’t. They perform these acts out of altruistic love for their fellow man, or as you tellingly call him, “that shmuck, my fellow man”.

So there’s Colette Byrne who helped hundreds of grieving people through her web forum Widows.ie after she lost her own husband in an accident.

Harry and Molly Flynn are presented with the Young Person of the Year award by Leo Varadkar. They used CPR to save the life of their younger sister Isabelle who has cerebral palsy. They are unflappable, even when it’s revealed they may have to go backstage and meet Mrs Browne at one of her shows (“I’m shocked really,” says Harry).

So there’s Colette Byrne who helped hundreds of grieving people through her web forum Widows.ie after she lost her own husband in an accident.

Harry and Molly Flynn are presented with the Young Person of the Year award by Leo Varadkar. They used CPR to save the life of their younger sister Isabelle who has cerebral palsy. They are unflappable, even when it’s revealed they may have to go backstage and meet Mrs Browne at one of her shows (“I’m shocked really,” says

Catherine Corless is recognised for her work uncovering the secretive burial of hundreds of children at the Tuam mother and baby home.

The people of Ballaghaderreen are declared Community Group of the Year for welcoming Syrian refugees to their town (“How could you say no?” says one of the volunteers).

The Irish Coast Guard is honoured, as are their heroic lost colleagues from helicopter Rescue 116 and the the community of Erris in Mayo who helped with the rescue operation. And Ifrah Ahmed who campaigns to stop female genital mutilation is named International Person of the Year.

And then there was game-changing female rugby referee Joy Neville, Father Peter McVerry whose second People of the Year award for his work with homeless people is a damning indictment of how little has changed, and the amazing Vera Twomey who fought to acquire medicinal cannabis for her sick daughter Ava. “Hope is very important,” she says with tears in her eyes, before going on to challenge Leo Varadkar to bring in legislation.

It’s beautiful. And it’s all amiably overseen by twinkly-eyed Grainne Seoige and square-jawed Aidan Power, who provide the explanatory links and help thrust abstract bronze statues of “people” at this year’s crop of unreconstructed ledgebags.

This is a celebration of some of the world’s best humans. It’s all very moving and ultimately we’re left with a feeling that people can be very good and often do the right thing.

It’s a nice feeling to have on a Sunday night with the world the way it is.