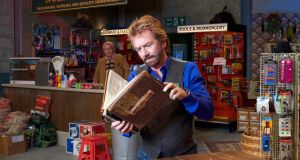 Cheap Cheap Cheap: The idea for the show presumably came to him when a man in the pub said: “You know the price of everything and the value of nothing, Edmonds”

How to describe Noel “Edmonds” Edmonds? Let me try. From a certain angle and in a certain light Noel Edmonds’s head resembles a friendly, well-groomed Yorkshire terrier waiting patiently for its owner outside a shop. On closer inspection, however, you can see that there is, in fact, a lot more going on with Edmonds’s head than canine metaphors have the power to suggest.

On top of his face his various hairlines collide into a gentle fluffy storm. The follicles swirl and entwine and evoke the majesty of nature. It’s hard to take your eyes off this storm, but take your eyes off it you must, lest you be lured to the rocks and ruin. Either side of the “eye” of the storm (the parting), the waters seem relatively calm until you reach the temples, where waves of hair sweep back over the “coasts” (the ears) and join as tributaries a wide river of tresses that wash over Edmonds’s neck and onto his shirt collar.

All of his hair is the colour of a flesh-coloured crayon. So is his flesh. Near Edmonds’s hair, on his face, there are two friendly twinkly eyes that are azure blue. These eyes can see into your soul, if you believe in souls. If not, sure you’re grand, don’t worry about it, he’s probably just looking at that bit of food on your teeth.

He’s certainly has aged better than his former Noel’s House Party sidekick, “Mr Blobby”, an obese pink buffoon who was, in retrospect, an on-point caricature of white people

Edmonds’s eyes are framed by laugh lines (presumably formed when Channel 4 agreed to air his insane new show Cheap Cheap Cheap) and overseen by a slightly frowning forehead (presumably formed when he was contemplating the lot of mankind each week on Noel’s House Party). His body is compact, like a child’s, but a child who is clad in the weekend garb of a junior bank manager (boot cut jeans, pointy brown shoes, a dapper waistcoat). Oh, and the bottom of his face is also a different colour to the top of his face (though this, my wife tells me, is just what a “groomed” beard looks like).

He looks good, to be fair. He’s certainly has aged better than his former Noel’s House Party sidekick, “Mr Blobby”, an obese pink buffoon who was, in retrospect, an on-point caricature of white people.

Anyway, as you will know if you’ve read my unfinished PhD thesis, Noel Edmonds, Mr Blobby and the Crisis of Late Capitalism, Noel Edmonds has always been interested in the financial imperative. From Swap Shop through Deal or No Deal and onto Cheap Cheap Cheap, the terrier-headed guru is nothing if not transactional.

The idea for Cheap Cheap Cheap presumably came to him when a man in the pub said: “You know the price of everything and the value of nothing, Edmonds”. After thanking the man for the compliment, I picture him rushing off to pitch a programme that rewards those with the best grasp of pricing. It’s kind of genius. If, as a child, you ever followed elder relatives around the shops as they rambled on about the price points of different condiments and thought, “this should be on television” then you will love Cheap Cheap Cheap.

The format? A pair of contestants, working together, must gaze at three items and determine which is the cheapest in return for cash prizes. However, Edmonds is an innovator, so the programme embeds this inside a sitcom and drowns it in a jaunty bon-tempi organ theme. Within the show’s world, Edmonds appears to live in a cheapo supermarket with outlandish characters who are prone to hi-jinks. There’s a new age guru, an entrepreneurial odd job man and a grouchy shopkeeper with a disturbingly bulbous prosthetic nose and a penchant for extended Donald Duck impersonations. Unstated is the possibility that Edmonds, sheltered from reality by the television industry since his beardy boyhood, thinks he’s working in a real shop. I won’t lie to you. This question keeps me awake at night. Odds are Edmonds has never been in a real shop and thinks guessing the price of items is just how things are done there. One way or another, Cheap Cheap Cheap is The Price is Right mixed with Open All Hours as directed by Lars Von Trier.

On Monday’s episode, the products the cheapness of which needs to be ascertained include: a sombrero, a beret and a cowboy hat; packets of chicken stuffing, bean-bag stuffing and soft-toy stuffing; a plastic dog, a brass hedgehog and a solar-powered duck; and three dog toys named, “the Wiggle Waggle Woggle”, “the Kong Extreme” and “the Giggle Ball” (coincidentally these are also the names of my nephews).

this is where the show ventures into the realm of avant garde theatre, as the two contestants, usually friends or lovers or relatives or a mix of all three, ramble in an unstructured form about shopping for similarly banal items in the past

I won’t insult you by telling you which items were cheapest (you know well), but Edmonds presents each item with a straightish face, lovingly referencing the retail outlet from which they were procured. And then he says, “Which one is cheap cheap cheap?” as though this is something people say (“It is now!” says you, predictably susceptible to his Edmondsonian wiles).

And this is where the show ventures into the realm of avant garde theatre, as the two contestants, usually friends or lovers or relatives or a mix of all three, ramble in an unstructured form about shopping for similarly banal items in the past. Supermarket demographics are alluded to. Personal habits are dissected. Long dead enmities are awoken. Blood feuds commence. Edmonds just stands there, chuckling away to himself or looking tired as his grotesque sidekicks get involved in improbable “scrapes” involving hula hoops or ladders. There’s something poignant, actually, about Edmonds standing there, caught between the wilful, unproductive tomfoolery of his colleagues and the tight familial bonds of the contestants.

And it’s bravely bats*** television to be airing five times a week in the middle of the day. Witness, for example, this interaction, during a bit where people contemplate the price of various soft drinks:

“Some dye I should imagine,” says a contestant.

“No, it’s raspberries and sweetener,” says Edmonds reading the label.

That should be in a gallery. It’s almost beautifully boring. But now the rumours are that Cheap Cheap Cheap is facing cancellation due to lacklustre ratings after just three weeks of existence. If so, I hope Edmonds really does think he’s living in a shop and they just let him stay on. As for daytime afternoons on Channel 4, they could just replace it with close-up footage of the smiling furry face of Edmonds. I’d watch it for the soothing qualities of the afore-described head alone. It might become tedious after a while, but it would certainly be cheap cheap cheap.