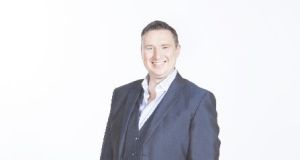 You know things are bad when Shay Byrne sounds rattled. The host of Rising Time (RTÉ Radio 1, weekdays) is normally a source of preternaturally good cheer for early risers, his manner so effortlessly winning that one can overlook his regularly dubious choice of tunes. But as he kicks off Tuesday’s show, the morning after the announcement of nationwide Level 5 restrictions, Byrne is in a sombre mood.

“Good morning to my friends who didn’t sleep a wink,” he says, perceptively enough. “Here we go again.”

The last time the presenter was this lugubrious was when news of David Bowie’s death broke in January 2016, and we all know what an annus horribilis that year turned out to be. (Though looking back from our current vantage point, maybe it wasn’t that bad.) Nor does Byrne’s humour appear to improve much as the show goes on.

“How am I this morning? Slightly overwhelmed,” he says to business correspondent Petula Martyn. Later, after his line to sports correspondent Darren Frehill drops out, he remarks that “in the greater scheme of things, it doesn’t matter a fig.” It’s all a bit Pagliacci.

Byrne’s demeanour is so disconcertingly out of character that Morning Ireland suddenly seems like an enticing prospect, even when the news is this glum. His insistence on playing Garth Brooks songs doesn’t help matters. But his mood is also entirely apt, mirroring the frazzled state of his listeners.

But Byrne hasn’t completely succumbed to despondency. “I picked myself up this morning at 4.15 and dusted myself down,” he tells Martyn. Sure enough, he maintains a sliver of optimism throughout the show, from urging listeners to be kind over the coming weeks to delivering his sign-off line – “Have a lovely, lovely day, whatever you’re up to” – with a wry sincerity that elevates it from cheesy catchphrase to something more like a dogged credo.

Reassuringly, by Thursday, Byrne is as peppy and jovial as ever: “I’m very superficial,” he quips. Possibly. But he’s also good at his job. Even when he’s downbeat, Byrne somehow can lift his weary audience’s spirits.

An altogether chirpier atmosphere pervades The Ryan Tubridy Show (RTÉ Radio 1, weekdays), where the presenter is determined to rouse his public from creeping fatalism. In fairness, he realises people may not be in great form: on Tuesday, after asking listeners how they’re doing, he jokily issues a reprimand for an imagined salty response. “That’s fine, you’re allowed to let off a little steam today when it comes to a rant and a rave,” the host says, apparently unaware that indulging in the latter activity is a penal offence.

But Tubridy himself has no truck with negative thoughts. “I think it’s going to be okay,” he states firmly, displaying an optimism even Norman Vincent Peale might find perplexing. Expanding on his sanguine outlook, Tubridy suggests the current situation isn’t as bad as the first lockdown, which was “science fiction dark”. For one thing, schools are now open, he notes.

He resolves to offer practical help for small enterprises forced to close, directing online shoppers towards them. “Abandon Amazon for the next few weeks and shop local,” he implores. The presenter does his bit by tagging businesses on his Instagram account, and goes as far as to predict that if people support each other, “We could have a really beautiful Christmas”. He ramps up the cheerleading on Wednesday. “Send business to here, Ireland, home, home, home,” he says, practically thumping his desk.

For those who think Tubridy can do no right, this kind of head boy earnestness is guaranteed to rub them up the wrong way, particularly when the host announces that he’s devoting an episode of The Late Late Show to the issue. But his spiel sounds genuine, driven by benign impulses and a sense of purpose.

Certainly many of the week’s items are underpinned by ideas of togetherness. He talks with a Cork mother and daughter who both have won the “Carer of the Year” award, and speaks to a woman who gave birth to her daughter in a mother and baby home, and who are now both artists. It’s easy to detect the underlying theme. “We all need to hold hands in this one,” Tubridy says, in case anyone misses the point.

This spirit of solidarity manifests itself in the less likely environs of the Hard Shoulder (Newstalk, weekdays), albeit in a more resigned tone. Since taking over the reins of the show, presenter Kieran Cuddihy has made a point of questioning official wisdom, so it’s unsurprising when he says that “anger and frustration” is “utterly understandable”, particularly among business owners and freshly redundant employees.

Accordingly, he interviews Dr David Nabarro of the World Health Organisation about the effectiveness of restrictions. It’s a timely conversation, as Nabarro has been cited as saying lockdowns should be avoided as a policy measure. In fact, he tells Cuddihy that he has been “misquoted a bit”. Lockdowns have severe consequences, Nabarro notes, but his point “was not to say we should just let go, it was to say we’ve got to get the systems right.”

Pressed by the host, he concedes that the Government perhaps had little choice, but he adds repeated lockdowns should be avoided. Instead, the goal should be a “well-organised community level public health service”.

Aye, there’s the rub. Cuddihy is to be commended for his tough-minded positivity, but after hearing that, listeners might be forgiven for being less hopeful.

When hosting his regular “Quiz of Today” slot, Ray D’Arcy (RTÉ Radio 1, weekdays) often helps out contestants, but he goes one further on Wednesday’s edition during a contest between callers Patrick and Helen. D’Arcy poses a couple of poetry-related questions.

“In which county was Patrick Kavanagh born?” he asks Patrick. “Co Sligo, was it?” comes the answer. “No, you’re thinking of Yeats. It was Monaghan,” says D’Arcy. D’Arcy’s then puts this taxing question to Helen: “Which county in Ireland is known as Yeats county?” “Sligo?” replies Helen, not quite believing her luck.

“Is correct,” confirms a sheepish-sounding D’Arcy, suddenly realising things have gone from bad to verse.