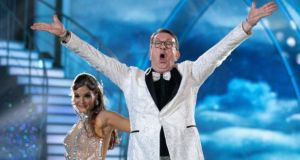 One of the contestants on Dancing with the Stars Ireland has said he will continue with the show, despite receiving criticism for his participation in the competition. Photograph: Kyran O’Brien

One of the contestants on Dancing with the Stars Ireland has said he will continue with the show, despite receiving criticism for his participation in the competition.

Fr Ray Kelly told RTÉ’s Liveline of the negative comments he received, including a Christmas card which commented on what happened to John the Baptist when a woman danced for him - the saint was beheaded and his head put on a platter.

He never saw the card in that menacing light, he added, and he “never actually reported it to police”.

But Fr Kelly said there was also a “few other negative comments here and there – one or two said I shouldn’t have been on the Late Late Show between two lovely ladies either, stuff like that”.

He said he got half a dozen letters and cards containing negative comments and telling him to leave the show.

“[I] got a card from a woman saying it would be a wonderful example for the people of Ireland if I gave up dancing as a sacrifice for Lent. To pull out of the show.

“As a priest for 31 years I’ve never really experienced that level of criticism, I’ve always worked hard in the parish and been there for my parishioners no matter what parish I’ve been in.”

He said he received some criticism previously if he forgot “to put a Mass in the bulletin but this level of criticism I’ve never experienced”.

The backlash came to a head at the end of January when Fr Kelly took a phone call from a man asking to speak to the priest.

Fr Kelly said the man gave his name and left a similar voice message on his phone later that night.

“That really got me down. I thought I really shouldn’t be on the show.”

He went to some of the production team from the show thinking he would have to pull out of the Dancing with the Stars. “I had a couple of bad experiences with the first live dances on TV, I put it down to my mind being completely twisted with what was going on.”

“Once I got it off my chest then, once I talked to the company, when I went in to the show they assured me of the highest respect for my priesthood and the have shown that 100 per cent totally for me in every dance I’ve done.

“It’s hard work. [The] parishioners are behind me. The bishop was first person I spoke to when asked to do this and he warned that there will be people out there who will knock you, if you’re going to take part in this make sure you enjoy it.”