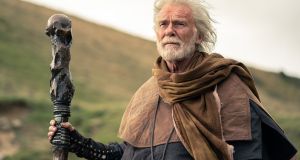 Doctor Who has visited many strange and surreal places across the decades. But in its latest episode the series beams down to perhaps its most bizarre setting yet: rural Ireland in the 1950s.

What a curious vista it is. The light is honeyed, as though filtered through the finger-tips of ancient Celtic gods. A lulling violin plays on repeat loop, inducing flashbacks to that time you nodded off listening to a mindfulness app.

Oh and everyone talks in not-quite stage Irish accents that land just (but only just) the right side of toxically twee. It’s as if someone had so thoroughly enjoyed the My Lovely Horse video from Father Ted that they decided it would provide a solid basis for a sci-fi epic.

Where is the Doctor amid these proton blasts of whimsy? Yes, well that’s the disappointment. Jodie Whittaker’s eccentric time-traveller is nowhere to be seen in the Ireland flashback segments of Ascension of the Cybermen. She is in a different time-stream pitted against square-headed weirdos who speak in a chilling monotone (insert your own Renua joke etc).

It’s a long way from Gallifrey to Galtymore. But Who show-runner Chris Chibnall tries to connect the cosmic dots with a tale that plays out like the origin story of Superman – only with bonus red-hair and freckles.

The adventure begins, as do all great yarns, with a homeless child manifesting in the middle of a country lane. He is discovered by a loving couple (Branwell Donaghey and Orla O’Rourke) who don’t have any children but have seemingly been sought out by divine forces (so just like Jesus and, as we’ve pointed out, Superman).

They adopt “Brendan” and take him to live in their huge one-off house, which contains nothing but flatcaps, hay and enough fine china to fill the Tardis several times over.

Brendan grows up to be a dead-ringer for Ed Sheeran if Ed Sheeran had nothing to look forward to in life but being shouted at by Christian Brothers and playing junior-b football. At least he doesn’t start singing.

The years ebb by, the balmy violin notes spiral into infinity and suddenly Brendan is all grown up. If he really was Seanie Superman this is the point at which he’d throw away his flatcap and slip into a lycra jumpsuit. Unfortunately without a convenient phone booth in which to change, he’d have to strip behind a hedge and the guards would probably arrest him for indecent exposure, stopping his superhero career in its tracks.

However, no such problems detain Space Brendan (Evan McCabe). Instead he himself joins the Garda. This is where his superpowers are revealed as he makes penalty points disappear with a single blast of his laser eyes.

Actually no, that doesn’t happen. Instead, it turns out he can’t be killed. Not even when a robber stealing a schoolbag pushes him off the Cliffs of Moher (which are apparently adjacent to the midlands village where he lives). He wakes with a pounding headache and a sense that something terrible has happened. This is very Irish. What isn’t Irish is the realisation that he’s died and come back to life.

If you haven’t watched Ascension of the Cybermen you’re probably thinking that none of the above sounds terrible. So it’s important to point out that all of the Irish scenes in the 60 minute helping of Whovian wholesomeness are bathed in an odd sepia light, as if the BBC and smeared its cameras in treacle.

And the music, the music! The fiddles never stop and soon are inside your head, howling like the mindless ululations of the piping daemon god Azathoth. Which isn’t really what you want on a Sunday night when you’ve only just managed to put the kids to bed.

We should also point out that whilst all this is happening Doctor Who is off battling Cybermen with detachable heads. Doctor Who battling Cybermen with detachable heads is what we’re all here for obviously so it’s a mystery why Chris Chibnall has also bunged in a bug-eyed homage to the Quiet Man. Space Brendan’s story does have a few kinks towards the end, it’s true. We next join him on the day he’s retiring as a garda. It’s the Seventies or possibly the Eighties because one of his fellow officers now sports an afro.

But there is no long walk into the sunset for our hero. Waiting for Brendan outside the station are ... his dad and the guard who recruited him initially. And they haven’t aged a day. He’s hauled off to a secret room and subjected to a torturous interrogation that leaves him screaming.

Have they got inside his head? Has he been forced to give his opinion on a new RTÉ comedy starring Amy Huberman? Whatever it is, his sanity crumbles and his wails rise into the air. All will (hopefully) be revealed in this week’s finale.

Science fiction and Ireland have a patchy history. The country is perceived in the wider culture as pre-industrial and science fiction is the literature of the machine age, so there is little crossover. This is in contrast to fantasy, where elvish type characters are sometimes portrayed as speaking in bastardised Irish. Andrzej Sapkowski’s Witcher novels are particularly guilty in that respect: in one book, Dryads greet each other by shouting “Ceadmil! Va an Eithne meath e Duen Canell!”.

So it’s a novelty to see Doctor Who pitch its police box in the old sod. It’s just a shame that the instant it does so it is set upon by vicious hordes of cliches.

The Doctor’s foray to Ireland is the science fiction equivalent of a postcard of a donkey gazing over a stone wall. It’s pretty and not entirely disagreeable. But oh for an army of Daleks to come rumbling through and knock the entire sorry edifice down.