Sally Rooney’s Conversations with Friends to be filmed for BBC 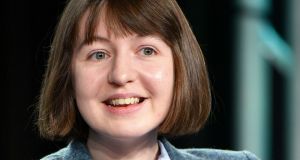 Sally Rooney: the BBC will screen its adaptation of her second novel, Normal People, in the spring. Photograph: Amy Sussman/Getty

The BBC is to continue its burgeoning relationship with Sally Rooney by adapting the 29-year-old Irish author’s 2017 debut novel, Conversations with Friends. The 12-part series will be directed by the Oscar-nominated Irish film-maker Lenny Abrahamson and produced by Element Pictures for BBC Three.

Conversations with Friends will be the BBC’s second project with the acclaimed writer. Its forthcoming adaptation of her 2018 novel, Normal People, starring the up-and-coming Irish actor Paul Mescal as Connell and the English Cold Feet actor Daisy Edgar-Jones as Marianne, is due to air in the spring. That series is also directed by Abrahamson and produced by Element Pictures.

The Irish production company, which was founded by Ed Guiney and Andrew Lowe, has made a string of hit films in recent years, including The Favourite, Room and The Killing of a Sacred Deer.

Conversations with Friends follows two college students, Frances and Bobbi, in Dublin as they forge a strange and unexpected connection with a married couple, Melissa and Nick. The dramatist Alice Birch, who worked on Normal People with the Irish playwright Mark O’Rowe, will write a number of the episodes.

The BBC’s head of drama, Piers Wenger, says: “We are all addicted to Sally Rooney’s writing and will plunder her literary canon as long as she is writing. And so, on the back of the taut and tangled Normal People, we are delighted that Sally has entrusted us, and the wonderfully talented people at Element Pictures, with her debut novel, Conversations with Friends. To top it all, Lenny Abrahamson has agreed to continue his association with Sally to direct.”

Explaining why the BBC chose to film the two books in reverse order, Wenger says: “Conversations with Friends was in development elsewhere. Sally had seen how well Normal People had played out as 12 half-hours, because it allowed you to get inside the minds and lives of the character. Normal People is a different piece with a different tone and a different set of characters.”

The rise of the virtual book club
5

Can an online video or image capture an artwork in all its real-world glory?
9