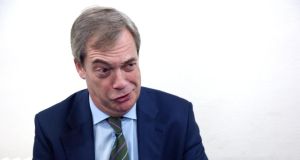 Nigel Farage’s appearance is something of let-down, at least for anyone expecting him to live down to his caricature as a blinkered, prejudiced little Englander. Photograph: Bryan Meade

Will Ireland ever solve its British question? Not any time soon, judging by the way Brexit again saturates the airwaves last week. It seems as soon Ireland tries to go about its own business, we see the dreary steeples of Whitehall and Westminster emerging once again, exerting an inexorable gravitational pull on affairs here. For Irish life to be disrupted by the chaotic Brexit telenovela is bad enough, but to hear its prime mover urging people here to follow Britain’s example, as Nigel Farage does with Marian Finucane (RTÉ Radio 1, Saturday & Sunday), is to wonder in despair, “was it for this?”

Actually, Farage’s appearance is something of let-down, at least for anyone expecting him to live down to his caricature as a blinkered, prejudiced little Englander. Rather, the former UKIP leader is full of breezy bonhomie as he faintly praises Leo Varadkar (“a very good performer”) before delivering a sucker punch. The Taoiseach, Farage cheerily suggests, is “putting his loyalty to the European project perhaps above that of Irish people”. Thus does a British politician effectively accuse an Irish premier of treason for not backing his point of view.

Farage talks grimly about abuse suffered at the hands of anti-Brexit protestors, calling them “people who use violence to shut down debate”, but elides the fact that Labour MP Jo Cox was murdered for her pro-remain views

Farage makes his arguments in upbeat, even jocular manner, before concluding in darker terms. He says the idea of the “democratic nation state” is at the “core” of his opposition to the European Union, with its overbearing unelected bureaucracy. Nothing to argue with there, except he lauds the examples of Hungary and Poland and the Czech Republic, all currently embracing xenophobic authoritarianism.

Similarly, Farage rejects charges of racism – Enoch Powell’s infamous “rivers of blood” speech on immigration was “ill-judged”, he says – yet he presents the arrival of Syrian migrants in remorselessly negative terms, as burdensome and threatening. He talks grimly about abuse suffered at the hands of anti-Brexit protestors, calling them “people who use violence to shut down debate”, but elides the fact that Labour MP Jo Cox was murdered for her pro-remain views.

As for Ireland, Farage raises good talking points about the wisdom of joining the euro. Less credibly, he doubts EU membership has helped economic growth here. Instead, he suggests that Ireland would have been richer by staying out of the EU and retaining its fishing rights. It’s an notion that may chime with anyone who believes Ireland was a fish-fuelled boom economy before EU membership. But it’s too much for Finucane, whose tone of polite scepticism gives way to spluttering incredulity, without any apparent effect on her guest’s confidence in his arguments.

For all that, it’s an instructive interview. Farage displays his undoubted political strengths – his easy affability, his valid concerns, his tenacious prising at niggling doubts to make his point - without ever quite dispelling the notion that a substantial proportion of his project’s success rests on promoting fear and loathing.

But he certainly has his fans. On Monday, the Pat Kenny Show (Newstalk, weekdays) carries a fascinating report by Richard Chambers on the Dublin conference on “Irexit” attended by Farage. Chambers talks to the people there – mostly men, he notes – who voice concern about growing immigration and the erosion of sovereignty and democracy in measured language.

But there are more strident voices. Chambers reports on the speech by Cormac Lucey, the academic and columnist, which calls those who would cede control to the EU as “Quislings”, after the Norwegian Nazi collaborator – the treachery card again. Columnist John Waters’s speech, meanwhile, characterises the EU as a “cancer” that has eroded family, church and nation. Unintentionally or not, Waters’s grouping together of these three institutions sounds perilously close to a litmus test for social conformity or ethnic purity. After this, Farage sounds like a stand-up comedian.

Not that Kenny is laughing much. He decries the “hypocrisy” of Farage taking his European Parliament salary: “I really find that hard to stomach.” The whole event seems bring Kenny down with a bad case of dyspepsia in general. It’s particularly pronounced when Chambers plays a vox pop with an English man, resident here for nine years, who complains about the impact of immigration in his native county of Sussex, but who doesn’t view himself as a migrant. Ireland isn’t a foreign country, he says, rather “part and parcel” of the same culture: “We both speak English.”

Kenny gets properly annoyed as such accents advocate a European exit. “There’s a ready remedy for them,” he says, “if they want to get out of the EU, go home.” He may not favour Irexit, but Kenny clearly doesn’t welcome all immigrants with open arms.

Certainly, there seems no need to ask Nigel Farage back any time soon, provocative company though he can be

It all adds pertinence the question asked by Ciara Kelly on Lunchtime Live (Newstalk, weekdays): should talk about Brexit be banned at dinner parties? Kelly hears from Rupert Wesson of etiquette company Debretts, who feels dinner conversations are boring if talk of politics is excluded, though the subject shouldn’t dominate proceedings.

“If you find you have guests who are dragging the evening down, then perhaps put them to the bottom of our invite list,” he suggests, underlining his own impeccable tact. Certainly, there seems no need to ask Nigel Farage back any time soon, provocative company though he can be.

Kelly, for one, takes the hint, preferring to concentrate on the reliably thorny subject of why so few Irish pupils can speak Irish. Far from being an excuse for a spot of Gaeilgeoir-baiting, the host’s discussion with columnist Brenda Power is disappointingly constructive, promoting the sensible idea that being immersed in the spoken language is the best way forward. Naturally, however, some callers get hot under the collar, suggesting it’s still an intractable issue. But at least it’s an Irish question.

Radio Moment of the Week: There Hugo again

After an unexplained absence, the letters of fictional correspondent Hugo start arriving again on Marty In The Morning (Lyric, weekdays). As read with hammy relish by Marty Whelan, these epistles about life in a dotty country house have long been a daft delight, mixing wry observation and Wodehousian whimsy with groan-worthy jokes.

On Monday, Hugo recounts a mix-up about a dead cow with a local farmer, who thinks Hugo is talking about his (very much alive) mother-in-law Myrtle. In other words, they can’t tell one auld wan from the udder. Ba-dum-tish!