Reality TV: Netflix show gets up close and personal with Airbnb owners - and it’s not pretty 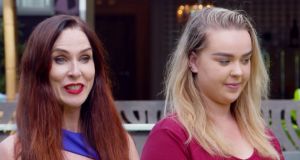 ‘Instant Hotel’: Mother and daughter duo Babe and Bondi, who run a margarita-themed Airbnb, treat everything with deadpan disdain

There is nothing like the hypnotic magic of Channel 4’s Sunday staple Four in a Bed. Its winning formula of sniping B&B owners being monstrously passive-aggressive to each other takes over the entire afternoon of programming, such is its highly addictive qualities. Its viciousness wrapped up in chintz has somehow become the more civilised, soothing alternative to the culinary noise of Come Dine With Me. Whether removing entire fixtures to locate holes in the walls, crawling under beds to find dust bunnies and sticking their hands down the U-bend to check the pipework, the couples and business owners of Four in a Bed are competitive to the point of derangement – the Basil Fawltys and Sybils of reality telly.

The format is so simple it’s no surprise that it has been adopted by other countries, and thus we now have Netflix’s attempt at recreating its remarkable appeal with Instant Hotel. This Australian import features Airbnb owners rather than the traditional, perfectionist B&B experts, giving it more of an amateurish air. First host Adam makes this immediately apparent as he nudges his wife Kathy, laughing: “We don’t know what we’re doing but we’re doing a bloody good job of it!” in reference to their spacious accommodation in the rustic area of Humpty Doo. Unlike Four in a Bed, the homeowners are also judged by pristine hospitality professional and interior designer Juliet Ashworth, who swoops in to cast her discerning eye over each house to prevent any unfair marking or game-playing.

Thankfully her presence does not stop the usual backbiting and bitchiness. The famed Australian bluntness is evident in how the pairs are described: design fans Leroy and Brent are the “fussy” couple, and that’s even before they’ve had a chance to speak. Mother and daughter duo Babe and Bondi are the Kath and Kim of the series. Clad in fluoro outfits, they manage to mangle their car upon arrival and treat everything with deadpan disdain. Greeted with a gift of some of a beach in Byron Bay in a vial, Babe sighs: “We have sand at home.” Later, when the guests stay at their Bondi Beach apartment, the writer and amateur photographer complains that she’s been “busier than a waxer before a Kardashian wedding”.

This salty attitude does not mix with the more refined Leroy and Brent, who end up describing her camp, margarita-themed home as a “Hollywood brothel” akin to a “gorilla in lipstick”. It’s this sparky, forthright attitude that sees Instant Hotel rival its pubic-hair-obsessed originator.

As with Four in a Bed, the guests are treated to some local hospitality, although unlike the genteel jam-making and flower arranging of the Channel 4 show, here the couples enter into classic endeavours such as toad racing and crab harpooning. While at Adam and Kathy’s they are forced to dine at the Humpty Doo Hotel Pub, which makes the Double Deuce in Road House seem welcoming. It’s an activity more upsetting than their disturbing day trip to watch a limbless crocodile feast on raw meat.

Fellow contestant Mark, with his mullet straight from Neighbours circa 1986, fits right in with the locals, who enjoy drinking from their hats, removing their teeth and throwing their shoes around in the dust. For the price of $1,000 a night, Babe looks around at the insect-infested living area, quipping that Humpty Doo is more Humpty Don’t.

The crew seem more hopeful about their next stop, Mark and Janine’s home in the beautiful surroundings of Barossa Valley, famous for its wine. Unfortunately, any ideas of countryside luxury are dismissed as they end up in a converted garage that looks like an abandoned Eddie Rockets, stuffed with nightmarish American diner memorabilia. The space is a unique Warholian hell made up of Coke machines, Marilyn Monroe cardboard cutouts and giant hotdog adverts that leave Adam wide-eyed in wonderment, gushing that “everyone in Australia needs to see this place”.

Garish, brash and brassy, Instant Hotel might be the show that proves there’s room for one more unlikely bedfellow in the curious world of reality telly.

Keira Knightley on Harvey Weinstein: 'I wasn't targeted because I had a certain amount of power'
Real news has value SUBSCRIBE