When Trump Came to Town: Tipping the hat to the landlord

Review: On one side are the protesters, on the other the good people of Doonbeg 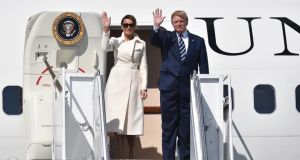 Past visits of American presidents to Ireland have come with stirring oratory. Think of John F Kennedy, praising his Irish ancestry for values that shaped the United States’ inclusivity. Or of Ronald Reagan, finding “a new contentment” in his soul. Or Bill Clinton, a charismatic and unifying cheerleader for the Northern Ireland peace process. Or Barack Obama, finding allies in the struggle against oppression and promising that “America will stand by you always in your pursuit of peace”.

And now this. In the absence of a formal speech, during a visit conducted with more embarrassment than pomp or ceremony, the annals will have to be satisfied with Donald Trump’s extemporary remarks during a photo op with a grimacing Leo Varadkar at Shannon Airport last month.

Borders? Walls? Even what passes for Trump’s stream of consciousness is divisive.

When Trump Came to Town (RTÉ One, Thursday, 8.30pm), a swift precis of this historic nonevent, has little trouble depicting the two sides that come to greet him. On one side are the protesters whom the Trump family signally fail to see outside Shannon Airport, a head-spinning alliance that one activist, Aisling Wheeler, does very well to sum up: anti-war protesters, women’s groups, anti-racism groups, environmental activists, LGBTQ-rights advocates…

On the other side, largely, are the good people of Doonbeg, the Co Clare town where Trump bedded down for two nights at his golf resort, one of whom, a  farmer named John Flannery, describes them as “appreciative of the business keeping this area alive”.

That hardly has the ring of a natural and moving encomium. So when the bluff editor of the Clare Champion, Peter O’Connell, explains that “it’s purely about economics: tipping the hat to the landlord, so to speak”, it could come as a surprise only to one person: Eric Trump.

Eric, a regular visitor, was the Trump who first scouted Doonbeg, then storm-battered and in financial straits, and who later secured it for his father’s portfolio of golf courses. So it’s almost touching to see Eric’s own investment in Doonbeg’s bonhomie as a plaintive attempt to earn his father’s approval. Or, at the very least, his syntax.

“So let me ask you a question,” Eric says to the modest crowd outside Tubridy’s bar, preoccupied with questions of protesters. “Does Doonbeg love Trump?” Doonbeg assure Trump it do. Trump seem happy.

For Trump, though, love and supplication can be very hard to tell apart, which makes Donald Trump jnr’s remark, on hearing that a local priest has reserved his family spaces in heaven, all the more remarkable. “Which we need, I might add, which we need!” Perhaps it’s a gesture of humility. Or maybe they have plans to develop the place.

Sex, swearing and flushing the loo: How these films broke big-screen taboos
6

Virginia Giuffre’s heartbreaking, vivid account of being told to have sex with Prince Andrew
7

Hamilton the movie soars above its stage-bound origins
10