Review: The show’s creators take us to their spiritual home, repackaging the 1980s as they go 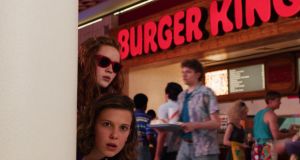 To grow up in the 1980s was to have your imagination steadily and irresistibly invaded by products. Films, at first fresh and daring, soon became franchises, extending their tentacles through ceaseless sequels. Toys sprang directly from some of those films, in figurines and spaceships, or generated their own sagas of transforming robots, caring bears, and ponies that were both little and yours. Video games, music videos and, belatedly, shopping malls formed the bright plastic geometries in this glorious empire of tat.

The new season of Stranger Things (Netflix, now streaming) may be the nostalgic adventure series’ most sincere expression yet, both a paean to the gaudy era and a distinct product of it. The creators of the show, the brothers Matt and Ross Duffer, are re-creationists of the culture of their youth, students of Steven Spielberg’s glossy, plucky storytelling and Stephen King’s under-the-covers horror. They tend to work best in rich colour, thick mist and thin emotions. Their understanding of childhood camaraderie, for instance – “Friends don’t lie!” – seems to come straight from Saturday-morning cartoons.

Now, in Hawkins, Indiana, in 1985, they take us to their spiritual home, the mall, a jagged palace of neon where our intrepid friends – wishy-washy Mike and his telekinetic ET, Eleven, now going steady; Lucas and Max, now going bumpy; Will, forever haunted; and Dustin, ebulliently unchanged – can go shopping. The Duffer brothers do something similar, taking fashion montages, John Hughes quotations, a pleasing nod to George A Romero and, of course, plot devices right off the peg.

When the power goes out, plunging everything into darkness, it is because of yet another invasion from the supernatural realm beneath, this one initially in the form of swarming, exploding rats, with some cloaked assistance by the United States’ 1980s supervillains, the Russians. (These days, they’re making a comeback.)

If that sounds like blatant recycling, smoothly but unoriginally done, so does the series’ attitude to sexuality, a staple of horror that must always be rigorously punished.

Here it’s the priapic Billy (Dacre Montgomery), the hot douche from last season, cruising lusty moms as the pool lifeguard, who gets his early comeuppance. Co-opted as a sort of double agent for the netherworld, in its own cold war with the earth, Billy and his part in the latest upheaval demonstrate how serviceably Stranger Things amalgamates its references – or, as the mall would approve of, how it repackages them.