TV review: The BBC’s 18th-century brothel drama isn’t as gratuitous as you might think 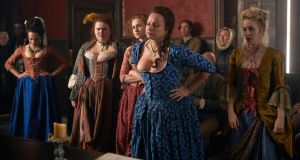 After a while you can recognise the main male actors in Harlots (BBC Two, Wednesday) by arse. “Look at him pumping away there. Those are definitely the confident, supple cheeks of Hugh Skinner, ” I found myself saying. (The excellent Skinner also stars in Little Birds this week, so I expect I’ll grow very familiar with his cheeky hindquarters this month.)

This sexual content isn’t as gratuitous as you might think. Harlots is a programme set in the London brothels of the 18th century, and it opens with some of the main sex-worker characters reading reviews of themselves from the pages of Harris’s List of Covent-Garden Ladies, a real publication of the era. (We don’t do reviews like that in The Irish Times, but I’m sure some readers felt we were heading in that direction as soon as we started reviewing television.)

There’s nothing television commissioners like more than olden-days sex, which seems to have been very well lit and enjoyable for everyone involved, like a local sports day or fete

On paper, Harlots looks like just another eruption of historical sexploitation. There’s nothing television commissioners like more right now than olden-days sex, which was, going by other television accounts, very well lit and enjoyable for everyone involved, like a local sports day or fete.

This is because, in most historical dramas, olden-days sex is but a convenient plot filler, like a musical number or a car chase or Maggie Smith giving a withering look. Where Harlots is significantly different is in its depictions of sex as grimy, riotous, ridiculous or upsetting – all of which are integral to the plot, and based on a well-researched book called The Covent Garden Ladies, by Hallie Rubenhold.

The drama has at its core two competing bawdy houses. One is that of an upwardly mobile anti-heroine, Margaret Wells (Samantha Morton); the other is a higher-status institution frequented by the upper classes and run by the more straightforwardly villainous Lydia Quigley (Lesley Manville).

Its writers, Alison Newman and Moira Buffini, must have been tempted to make this a camp, over-the-top, Dynasty-style tale of competing divas, but Morton and Manville are too good to waste on mere scenery-chewing. (Also, the scenery looks pretty filthy.) So they’ve done something much more interesting. They’ve taken it seriously.

In doing this they’ve neither avoided the more disturbing realities of 18th-century prostitution nor tried to put 20th-century value systems into older heads. For these characters, transactional sex is an inevitability that, at best, is their only source of money and power and, at worst, is rape and degradation. The line between the two stays uncomfortably blurred. Sex operates in this narrative as violence does in similar stories of criminal men.

And so Harlots ends up being fascinatingly morally complex. Wells loves her daughters and prides herself that she didn’t have them doing sex work as very young children – but then she auctions off the virginity of her youngest, Lucy (Eloise Smith), to a bunch of rich men at an opera, and we learn that her oldest, Charlotte (Jessica Brown Findlay), was similarly auctioned at the age of 12.

Wells still has an oddly moral core. She exploits her girls but is trying to protect her family from greater pain, disease and starvation.

Quigley is a darker and socially better-connected figure. She sets one naive young woman up for rape at the request of a local magistrate, then sells her to another brothel owner. (The opening beats of this story are explicitly modelled on William Hogarth’s A Harlot’s Progress, which also provides the images for the credit sequence.)

Harlots is very good. It’s deftly plotted and manages to be warm, exciting and distressing. For some reason it was condemned to the obscurity of ITV Encore when it was first produced, but now it has been acquired by the BBC, where it will, with luck, reach a wider audience (and maybe even trigger a fourth series).

It’s a great showcase for actors like Smith, Brown Findlay, Manville and Morton. The male characters are largely reduced to pumping buttocks with hypocritical heads attached. But that’s fair enough after decades of televisual dominance. And what buttocks they are, in fairness.

‘How happy he was’: Candid David Bowie photographs by his childhood friend Geoff
8