TV review: Little Birds tries to be shocking but can just look like a Duran Duran video 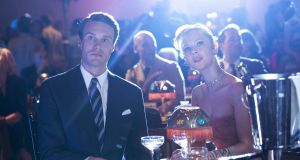 Little Birds: Juno Temple as Lucy Savage, with Hugh Skinner as the gay aristocrat she’s married off to

A sort of adaptation of one of Anaïs Nin’s dirty books (or erotica, as we call such things now), written on commission for an unknown collector, Little Birds has as its hero Lucy Savage (Juno Temple), scion of a wealthy US arms-dealing family who has already been medicated and therapised to deal with her wanton urges and is now being married off to a gay aristocrat who lives in Tangier.

We meet the Technicolor Savage family at dinner, where their all-American normality is edged with gun-toting, barbed grotesquery. Then we cut to a brothel where a gold-toothed woman (Yumna Marwan) is whipping a man in a gas mask before urinating on him. Everyone needs a hobby, says you.

In the absence of Truly Taboo Rumpy Pumpy (the name of my erotic novel), we get themes I don’t remember in the book. There’s a subplot about Moroccan independence, for example. (It’s possible I missed Nin’s references to foreign affairs when I read Little Birds 25 years ago, distracted as I was by the phwoar-an ones). There’s also some tonal confusion about whether we are to take the sporadic sexcapades seriously or if they’re just meant as a gentle distraction from a heightened melodrama about an heiress finding herself while on her holidays. One way or another, it doesn’t manage either nearly as well as Shirley Valentine.