Fontaines DC v The Coronas: Ireland has a Blur v Oasis moment to call its own 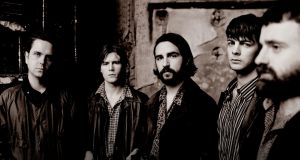 Finally, Ireland has a Blur v Oasis moment to call its own. Today, two of the country’s most popular bands, Fontaines DC and The Coronas, release albums. It’s like Country House v Roll with It all over again. But who in this scenario is Blur and who Oasis?

There is little doubt where critics’ loyalties lie. Fontaines DC’s A Hero’s Death is a sublime refinement of their Mercury-nominated 2019 debut. The tunes are better, the Eurosaver Brendan Behanisms dialled down significantly. Already the five-star reviews are rolling in. It’s probably too early to proclaim it the year’s best rock album… but it’s the year’s best rock album.

You’re going to do a double take, but The Coronas’ True Love Waits is absolutely fine, too. (It will help if you don’t confuse it with the Radiohead song of the same name.) Laugh all you like, but they’ve always existed slightly to the left of all those overhyped, undergroomed Irish artists trying to bore you to death on daytime radio.

Love or loathe their glossy pop-rock, The Coronas at least aren’t po-faced; they appear not to take themselves cripplingly seriously. And their new LP is a very accomplished suite of downtempo anthems. The critic who described The Coronas as “drive-time National” may have sustained a concussion before writing those words. Still, you can see, sort of, where he’s coming from. The Coronas are an entirely presentable mainstream rock band.

But anyway, back to the Blur v Oasis question. In 1995 the idiots’ guide to the great Britpop battle had it that Blur were the arty English Home Counties softies, Oasis the unvarnished north-of-England voice of the working classes.

Alas, these dynamics don’t quite fit with Fontaines and The Coronas. The former are undoubtedly the more avant-garde. But if you’re trying to transpose the southern-softie archetype to Ireland, you must look to The Coronas, whose frontman, Danny O’Reilly, is toff of the pops, having been educated at Terenure College.

It is Fontaines, if anyone, who share Oasis’s salt-of-the-earth background. None of the quintet are from Dublin city proper (their frontman, Grian Chatten, grew up in Skerries). And there are echoes of Noel and Liam Gallagher in their Manchester City jerseys in those early Fontaines photo shoots in which the band’s Castlebar-raised bassist, Conor Deegan, sports a Mayo shirt. Fontaines back then looked as if they were vaguely mad for it.

The face-off doesn’t really work in David v Goliath terms either. On paper The Coronas are the bigger deal, having headlined 3Arena. This weekend they were even due to host their own festival, in Bray. But their international profile is modest. The Coronas were set to play Shepherd’s Bush Empire, in London, this year. Fontaines are critical darlings from Brooklyn to Brixton. This year, before the world changed, they headlined Brixton Academy, which, with a capacity of 4,900, is more than twice the size of the Empire. They have also, of course, been nominated for the Mercury Music Prize, an honour that will continue to elude The Coronas for some time to come.

By those metrics then, The Coronas are the underdogs. They have certainly come out fighting promoting True Love Waits, with O’Reilly and his bandmates touring the country in an ice-cream van, signing records and handing out delicious treats. I’ll have to check, but I suspect Grian Chatten and chums won’t be spending the long weekend dispensing sundaes at a Golden Discs near you.

From a certain perspective, Fontaines DC and The Coronas represent the contradictory halves of the Irish psyche. Fontaines are torrid, angsty and arty. The Coronas are upbeat and comfortable with success – a beaming, bearded selfie in human form. It’s the combination of those qualities that makes Ireland the unique, perplexing and frustrating place it is.

So pick a side and cheer your favourite all the way to number one. (I’m popping out in a bit to very pretentiously buy A Hero’s Death on coloured vinyl.) Whoever triumphs, when we look at them on the figurative winner’s podium we will in a way be seeing our own reflection staring back at us.