At home on radio, Yates was provocative without tipping into gratuitous offence 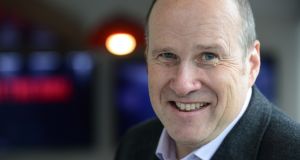 As Ivan Yates draws the curtain on his career as a radio and television presenter, he leaves behind many fans who will miss his inimitable and uncompromising style. But surely no-one will pine for him more than management at Newstalk, his home for over a decade.

Since making his debut there in 2009, Yates, 60, has become the station’s most reliably popular presenter.

Newstalk provided the former Fine Gael minister and businessman with the launchpad for the third act of his professional life: as well as his drivetime radio slot, The Hard Shoulder, he is co-presenter of Virgin Media One’s current affairs programme The Tonight Show.

But Yates in turn has won consistently high ratings for Newstalk in both morning and evening slots. Moreover, he has come to personify Newstalk’s self-image as a scrappy, iconoclastic rival to RTÉ, tapping into a sizeable demographic turned off by Montrose’s more staidly establishment voice. It’s an impressive achievement for a broadcaster whose approach at times seemed to consist of little more than pouring derision on his guests and grouching about liberal shibboleths.

Such an outcome wasn’t a given when Yates started 11 years ago, co-hosting Newstalk Breakfast alongside Claire Byrne. At the time, he was an odd choice for the job, better known as a former politician and bookmaker.

First elected to the Dáil as 21-year-old TD for Wexford, the Enniscorthy native served as agriculture minister in the rainbow coalition government from 1994 to 1997, before quitting politics to concentrate on his business interests in the form of his Celtic Bookmakers chain.

He was already a polished media performer, but Yates didn’t immediately find his feet as a presenter. Though he had a natural ease behind the microphone, as well as a robust sense of humour and a knack for speaking his mind, his chemistry with the more briskly professional Byrne never quite gelled.

Things changed when Chris Donoghue took over as Yates’s co-anchor following Byrne’s move to RTÉ in 2010. The new duo forged a jousting on-air partnership, with the young and liberally-inclined Donoghue acting as a foil to the middle-aged Yates’s fulminations against the follies of the over-sensitive and political correct.

Their entertaining exchanges – often stagey but sometimes charged by real differences in conviction – helped transform Newstalk Breakfast from a Morning Ireland also-ran into the station’s biggest show, growing from 55,000 to 172,000 listeners over six years.

Yates’s strutting self-confidence and his disdain for guests he thought were spoofing – usually politicians – could overshadow his keenly analytical mind for politics. But he had few peers when it came to “drilling down” (his favoured phrase) into the detail of politics, particularly during elections. Yates finally departed the morning show in 2016, leaving behind a buddy template for the slot that Newstalk have attempted to recreate ever since.

But his growing success on radio – and to a lesser extent on television, as presenter of TV3’s Sunday AM – was dogged by professional setbacks and struggles away from the airwaves. After his bookmakers’ business went into receivership, Yates filed for bankruptcy in Wales in 2012, entailing an enforced year-long absence from broadcasting.

His bankruptcy also led to prolonged legal wrangling as Allied Irish Banks chased Yates and his wife for debt, seeking possession of his family home. (The case was finally settled in February, prompting him to announce his retirement from broadcasting.)

Such woes placed enormous strain on Yates – as he has averred in press interviews – but he never mentioned financial or legal problems on-air, much less indulge in self-pitying soliloquies on the matter.

Instead, following a hiatus in 2016, he honed his solo act on Newstalk. He first helmed the Sunday show Yates Country, before taking over the crucial early evening weekday time slot on The Hard Shoulder. He revitalised the slot, which had been slightly rudderless since George Hook left it a year earlier.

Never a shrinking violet, Yates really found his voice on the drivetime show. Each edition opened with a personal editorial – which he might freely describe as a “rant” – before he engaged with his guests in equally uncompromising terms.

He was vocal in his prejudices, be it berating “nordies” and “pinkoes” or excoriating Brexit and sluggish bureaucracy. Unsurprisingly for such an alpha male, he could be patronising to women, while his conversations on soccer with former Liverpool player Phil Thompson were more akin to pub banter. But this was leavened by his irreverently blokey sense of humour, and his forays into unexpected areas such as slots on personal faith and green issues.

His profile grew further when he began co-hosting The Tonight Show alongside his Today FM rival Matt Cooper. Though he was an accomplished on-screen anchor, Yates lacked the impish zing of his radio persona: helming of the TV election debate earlier this year, he was so cartoonishly contemptuous of his political guests that one felt sympathy for them.

On radio, however, Yates had a nose for what audiences wanted. The Hard Shoulder became Newstalk’s most popular show, and Yates again proved himself the station’s top dog, besting Pat Kenny as he had previously done with George Hook.

Though Yates could flirt with populist tropes, as when doubting some pandemic measures, his positions were ultimately conventional right-of-centre, with the occasional maverick view deriving from his experience as a Church of Ireland Protestant in the (once-) Catholic republic.

While his erstwhile peer Hook got mired in controversial remarks about rape, Yates generally managed to be provocative without tipping into gratuitous offence. And while he generally spoke about his wife in an old school “her indoors” manner, there was no mistaking his feelings for his family.

The result was a broadcaster who knew what pushed his listeners’ buttons, whether in agreement or outrage. Amidst the bullish opinions, the pushy encounters and the gleeful slagging, Yates knows his stuff, from bad politics to good radio.