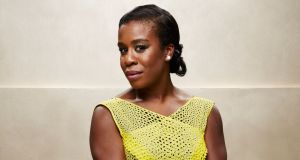 Shirley Chisholm was a woman of many firsts. She was the first black woman elected to Congress, the first black candidate to seek the presidency, and the first woman, full-stop, to participate in a US presidential debate. She introduced more than 50 pieces of legislation, most championing racial, economic and gender equality, and is often credited as paving the way for Barack Obama. In doing so, she occupied a space that many black women recognise: the solitary seat as the only such face at the table.

Uzo Aduba, who plays Chisholm in the acclaimed US series Mrs America, which has just finished on BBC Two, says that this was a key factor in bringing this formidable politician to life. “That feeling of being the ‘only’,” she says, speaking via Zoom with a warm smile on her face. “It was important to get that right.”

My mother used to say, ‘It wasn’t until I moved to America that I discovered there was something wrong with being black’

It’s certainly something Aduba can relate to. The 39-year-old made history in 2015 as the first female actor to win both a drama and comedy Emmy for the same role – the part of Suzanne “Crazy Eyes” Warren in Orange Is the New Black. “It was an honour to represent Chisholm,” she says, “because she’s not often portrayed. I just wanted to get her humanity.”

The humanity of the much-mythologised feminists of the 1970s is a central part of the series, which spotlights the aims and the internal struggles of the activists who fought to pass the Equal Rights Amendment – as well as the conservatives who opposed it, led by staunch anti-feminist Phyllis Schlafly. A lauded ensemble cast boasts Hollywood giants and household names: Cate Blanchett as Schlafly, Rose Byrne as Gloria Steinem and Tracey Ullman as Betty Friedan, author of The Feminine Mystique.

It’s the third episode of Mrs America that focuses on lesser-known congresswoman Chisholm’s failed bid for the presidential nomination at the 1972 Democratic National Convention. With historical figures being increasingly scrutinised and recontextualised in the wake of the George Floyd protests and the removal of various Confederate symbols, Aduba believes it is important to keep a level head with what may be more heroic figures, and not take a rose-tinted view.

“Whether in the UK or the US,” she says, “revisionist history can be very powerful in completely erasing someone’s imperfections and faults. It’s worth examining the shortcomings of our feminist heroes. That doesn’t make what they did within the movement less important. It just recognises where their blind spots were and encourages us to know and do better.”

Chisholm is the latest in a long line of strong female roles for Aduba. Last year, she starred in Miss Virginia, a biopic about Virginia Walden Ford, a single mother who fought for the creation of a school scholarship programme for low-income students in the early 2000s. Aduba first came to prominence via her critically acclaimed role as Warren in Orange Is the New Black, a character who started out as comic relief and, with time and skill, became increasingly layered and complex. Like Mrs America, Orange had a solid female ensemble cast and several women behind the scenes.

Growing up, I had a very solid, clear sense of self, in terms of ‘I can do anything, anything is possible.’ And then I stepped into the world and was met with a very different idea about who society thinks I am versus who I believe myself to be

It’s a constant theme in Aduba’s life as well as her career: her mother, who emigrated from Nigeria to Boston, was “the foundation” of her portrayal of Chisholm, who was born in New York but went to live with her grandmother in Barbados at the age of five. “There was a scene where Shirley was talking about growing up in the West Indies,” recalls Aduba. “It said almost verbatim what my mother used to say. She would say, ‘It wasn’t until I moved to America that I discovered there was something wrong with being black.’”

But Aduba’s mother did her best to insulate her from the limitations placed on black women in the US: success was not to be viewed as an exception, but rather as an expectation. It comes as no surprise to hear this. Aduba speaks purposefully, as if she appreciates the weight of her words. At times it’s like watching a keynote speech, peppered with perfected impressions of an archetypal African mother. “Growing up,” she continues, “I had a very solid, clear sense of self, in terms of ‘I can do anything, anything is possible.’ And then I stepped into the world and was met with a very different idea about who [society] thinks I am versus who I believe myself to be.”

In this world, she would find herself under pressure to change her name or her appearance. For example, in many African cultures, a gap tooth – such as the one she has – is considered a sign of beauty or wisdom, but it didn’t fit in with the accepted definition of a “Hollywood smile”. Having spent years learning to love her teeth, the whole process had to start again when she began her career in showbiz. She mentions a meeting she had with an agent, who came to a show of hers hoping to work with her.

“She’s like, ‘So what are we doing about that gap? Are we keeping it?’ As if we both had gaps, and we’re braiding our hair at a slumber party, trying to figure out if we’re going to call Tim tonight and ask him to the dance!” Aduba resolved to keep it, declined to work with the agent, and vowed never to bend to the arbitrary rules of her industry. “This business is so liquid,” she says. “To be shapeshifting, it’s like trying to catch the wind. You’re never gonna do it.”

Indeed, with film slowly diversifying, difference is gradually being understood as an asset to storytelling. The intricacies of Chisholm’s Mrs America episode have been roundly praised by critics, which is partly down to its director, Amma Asante. In a recent interview, Aduba said Asante was likely the second woman of colour she’d worked with in a directorial capacity. White directors directing white actors depicting the stories of other white people – generally men – is the default. Black women in film rarely have the same experience, which made a marked difference in how Aduba depicted the “misogynoir” that Chisholm faced.

“You can’t contextualise race and racism,” she says. “You have to have lived it to understand the feeling of it. So there’s not been some sort of substitution for Amma to understand – she doesn’t have to craft something, she just knows what I’m talking about because she is having the same experience as a black woman in the world. That was really nice.”

A lot of black women have been raised with this idea of not talking about family business outside the family. But I think the harm is sometimes that we’re not really even having those conversations inside the home

This proximity lends itself well to the episode, in which thorny intraracial issues are deftly portrayed. The most painful element of Chisholm’s story is how she was let down on all fronts, with her loyalty to both her race and her gender continuously questioned – so she was never fully trusted by either black men or white women. “I thought that was done really well,” she says, “because nobody was exempt. It would have been very easy to place it squarely on the shoulders of the [feminist] second wave.”

Despite Chisholm being a founding member of the National Women’s Political Caucus and the Congressional Black Caucus, both endorsed her white male opponent, George McGovern. Black male politicians pressured her to drop out of the race, with her longtime supporter Ron Dellums questioning whether she was “the candidate for blacks, or just for women”. These discussions around how black women can be let down within their own communities are not easily had. It is often seen as divisive, tantamount to airing dirty laundry.

“A lot of [black women] have been raised with this idea of not talking about family business outside the family, not having conversations in mixed company. But I think the harm is sometimes that we’re not really even having those conversations inside the home. Because our black men are constantly under attack, we’re keen to have that conversation, to the detriment of [black women] speaking about our own lives being under attack.”

These attacks on black men and women have become a global talking point. Protests have raged on across every US state and across the world, taking aim at every industry, Hollywood included. When I ask Aduba if she feels optimistic about the future, she says change is inevitable, in part due to the demonstrations but also because of a generation who are holding institutions to account in ways never seen before – at times without even needing to leave their rooms. In early June, she and her fellow Orange is the New Black castmates teamed up for an hour-long livestream about anti-racism and police reform.

“That is what’s going to be the power shift,” she says. “That is going to bring the industry either willingly with us, or kicking and screaming. And it doesn’t matter how you come. Just as long as you come.” – Guardian