‘Say Yes to the Dress Ireland’: I don’t think I will actually

TV review: If only the show went deeper, the family dynamics would be fascinating to watch 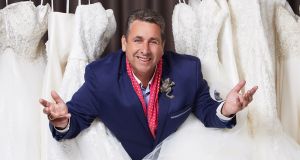 Peter Kelly, or Franc, who is rewarded for presenting the show with a 30-minute advertisement for his business

Tight at the top, loose at the bottom, a little bit boho, not too much bling, not too much detail, but free and casual and comfortable: the dress that Eimear Duffy imagines being married in is almost the precise opposite of the dress she will buy.

Standing before her mother and her bridal party, who shower her with approval and applause – the seal clap, the show calls it – Eimear is resplendent in a figure-hugging dress that is tight at the top, tight at the bottom, tight all over really, less boho than a corporate takeover, more bling than a diamond avalanche at Tiffanys, elaborately detailed, and neither casual, comfortable nor – retailing at 1,800 - free.

Say Yes to the Dress (RTE2, Monday, 9.30pm), an international franchise that is quickly running out of territories, is a show that honours that special time in a woman’s life, a rite of passage that involves the assistance of a personal shopper and an audience.

It is an American kind of indulgence, one that literally puts its customer on a pedestal, while giving them every undivided attention and an assortment of mixed emotions: hope, frustration, acceptance, joy, debt. “It gives me the feels,” approves Eimear’s bridesmaid Aoife, which is what Say Yes to the Dress intends to do for you.

Although it insists on the apparent individuality of the dresses (all of them white and straight) and their wearers (ditto), the format of the show treats this ritual as entirely uniform, an off-the-peg experience. The bride initially expresses her hopes and bodily hang ups, while spilling some adorable backstory about her romance, then inspiring or moving details about herself. She tries on precisely three dresses while the most important women in her life use an array of responses and gestures to gently undermine her self-esteem.

The first dress is always hopeless, dismissed with oo-er remarks (“The priest will have a heart attack if he sees them puppies hanging out,” professes a friend) or tart insights from Peter Kelly, the self-styled wedding planner, Franc, who is rewarded for presenting the show with a 30-minute advertisement for his business.

“She told us she loves boho, but I’m, like, does she?” says Franc, a man who took his name from a Martin Short character, his wardrobe from Liberace and his oratory style from a 1990s Valley girl.

The second dress is getting there but swiftly dismissed: “It’s, like, no, take it off!” Franc explains, who is indifferent to zingers. The last dress, however, is, like, perfect and will be celebrated with gasps and laughter and - hope upon hope - tears. “Once I hear the family seal clap, I know this will be the dress,” says Franc. It’s a strange business that compares heartfelt appreciation to the displays of a trained animal. “Are you saying yes to the dress?” Franc is contractually obliged to ask. “Bark bark,” they say.

It’s a shame it goes no deeper than that, because a psychological parade of fascinating family dynamics should always be fun to watch. Take the sneakily deflating remark of a younger sister: “I like it - but I don’t think it’s you.” Or the infantilising mother who emphatically endorses one roundly detested number with the words: “She’s like a little girl in it.”

“All I’m trying to do is find out information,” confides Franc, as stealthily as a man can wearing a bright lilac blazer with a shimmering peacock broach. But when each successful dress has identical glittering webs across their backs, and nobody here considers anything other than white and veiled, does that information yield wildly different, personalised results?

Or is the sly secret of this show’s apparently inexhaustible formula something much more subversive: that underneath the individual rituals of your special day, weddings basically are all the same?