Graham Linehan: Trans activists ‘don’t realise the damage’ they do 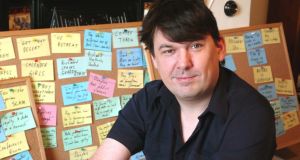 Graham Linehan has defended his views on transgender issues, in advance of an appearance on RTÉ’s Prime Time on Tuesday night.

An online campaign against the inclusion of the comedy writer in the Prime Time report has culminated in a petition to the broadcaster seeking his removal from the programme.

It reads: “We request that RTE reconsider their decision to air a segment featuring Father Ted creator, Graham Linehan on their upcoming Prime Time programme on trans issues in Ireland.

“Graham Linehan is not a medical expert and he is not transgender. He has frequently expressed transphobic views in public and has used his social media platform to denigrate transgender people.”

The station has said it “won’t be commenting on feedback received in advance of the programme transmission,” a spokesperson said yesterday. It says the report includes 10 contributors “representing a broad range of views” and examines “the exponential growth in the number of young people seeking to change gender, and the implications of the proposed new law allowing them to do so without their parents’ consent.

RTÉ has expressed the hope that viewers “will find the programme a fair and responsible examination of an issue of considerable public importance”.

The current transgender debate is often vitriolic – especially when conducted online. The term “transgender” broadly describes people who identify as having a different gender from their birth sex. The issue of children and teenagers choosing a gender different from the one assigned to them at birth is a particularly divisive one.

Linehan – an active Twitter user with 656,000 followers under his handle @Glinner – has tweeted extensively about transgender issues. While he has many supporters, his comments have opened him to online accusations of bigotry and transphobia.

Linehan outlines his view to The Irish Times: “I don’t think I’m saying anything controversial. My position is that anyone suffering from gender dysphoria needs to be helped and supported.”

But, he says: “I disagree fundamentally with certain aspects of current activism. They don’t realise the damage done by certain outrageous claims.”

He “of course” agrees that gender dysphoria (defined as distress a person experiences as a result of the gender assigned to them at birth) is real, but has a problem with widening the definition of transgender.

He is sceptical of: “early affirmation” of transgender; self-identification of transgender; and “the actions of some activists, which will stop those genuinely needing help from getting it”.

“I’m afraid ultimately there will be a backlash, and it will be against LGB as well as T people.”

The award-winning Father Ted, Black Books, and The IT Crowd writer (who is currently co-writing a Father Ted musical) became involved in the issue after an episode of The IT Crowd in which Douglas Reynholm’s character unknowingly dates a woman who turns out to be transgender.

“I thought the episode was harmless. Though it could have been better,” Linehan says. After it aired, he was called a bigot on Twitter. Linehan distinguishes between the character, who is transphobic, and calling the episode, or himself, transphobic.

“Some people don’t see the problem repeating the dogma [that] trans women are women,” says Linehan, who has a problem with “privileged white people saying you must accept anyone who says they are a woman”.

“Some people have a seriously held belief that trans women are literally women. So if someone who identifies as a woman is attracted to a woman, they are considered a lesbian. There have been protests at pride parades in London and New Zealand, from lesbians who say this is affecting lesbians on the ground.”

Linehan says he is astonished the argument has got so far. “A lot of transgender people agree with me. I’m not transphobic. Because of this debate, I now have a number of friends who are trans, and they don’t agree with this dogma.”

He characterises some extreme trans activists who have “glommed on to the movement” as “a mixture of grifters, fetishists, and misogynists”. (There is no suggestion that those who petitioned RTÉ fall into these categories.)

“All it takes is a few bad people in positions of power to groom an organisation, and in this case a movement. This is a society-wide grooming.”

Regarding early transgender intervention for children he says: “Adults can do what they want,” but “it is dangerous to offer surgery and drugs therapy to young teenagers going through puberty who are gender non-conforming.

“There are lots of gender non-conforming children who may not be trans and may grow up to be gay adults, but who are being told by an extreme, misogynist ideology, that they were born in the wrong body, and anyone who disagrees with that diagnosis is a bigot.”

“It’s especially dangerous for teenage girls – the numbers referred to gender clinics have shot up – because society, in a million ways, is telling girls they are worthless. Of course they look for an escape hatch.”

“The normal experience of puberty is the first time we all experience gender dysphoria. It’s natural. But to tell confused kids who might every second be feeling uncomfortable in their own skin that they are trapped in the wrong body? It’s an obscenity. It’s like telling anorexic kids they need liposuction.”

“Not many people speak out about it, because people are terrified [of online abuse] and don’t want to get involved. I understand that. It’s hard to decide to subject yourself to [the attacks].”

Through talking about it on Twitter, he perceived that women were often shut down when trying to broach the subject. “Women would have the slur ‘terf’ [trans exclusionary radical feminist] spat at them by young men in beards.”

Linehan says he doesn’t regret speaking out. “I thought I was able to take it,” he says, though he admits that confidence was challenged when his wife was targeted online.

Undeterred, he will appear on Tuesday’s Prime Time at 9.35pm on RTÉ 1.

A Long Petal of the Sea: Characters take back seat in story stacked with historical detail
8