Gay Byrne’s legacy gets presenters talking... about themselves

Broadcaster’s death prompts on-air eulogies from colleagues, plus some self-revelation 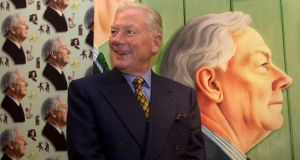 Gay Byrne with his portrait in the National Gallery of Ireland in 2000. Photograph: Cyril Byrne

Even when he left us, Gay Byrne commanded the airwaves like no other. It was 2.45pm on Monday when Joe Duffy, having noted the time and date in sombre manner, announced the death of the legendary broadcaster. “If the Ireland of the last 60 years had a voice, it would be the dulcet, challenging, amused, questioning reassuring voice of Gay Byrne”, he told his listeners on Liveline (RTÉ Radio 1, weekdays), alternately sounding as if he was reading a script or about to weep. “We as a country are all the better for his life.”

It was fitting that Duffy should break the news on air. Having been the late broadcaster’s protege, colleague and friend, Duffy has finely attuned antennae when it comes to reading the public mood and playing to it, though not quite to the same degree as Byrne. Sure enough, Duffy captured the sense of occasion – the Irish equivalent of a monarch’s passing, at least in terms of affection and resonance in the national psyche – with a combination of respectful gravitas, folksy insight and unvarnished emotion.

Moreover, Duffy’s snap eulogy told us as much about himself as his late friend, “the boy from Rialto”, as he quoted the poetry of WB Yeats and Raymond Carver and repeated the word “beloved” like a mantra. Somehow, though gone, Byrne was still able to get people to reveal themselves. It was a trait that ran through the tributes that flowed over the following hours and days.

A clearly moved Vincent Browne referred to the presenter’s  politics, claiming his  influence was such he killed a wealth tax merely by airing his opposition

“He was a genius at getting people to say things they probably shouldn’t have said,” said Ray D’Arcy (RTÉ Radio 1, weekdays), before hearing Vincent Browne do something like that himself.

A clearly moved Browne recounted his experiences of Byrne but also referred to the presenter’s personal politics, claiming his public influence was such he killed a wealth tax merely by airing his opposition. Whatever about that statement’s veracity, Browne could perhaps have waited an hour or two before making it. But that’s not his style.

Other luminaries were equally open. The veteran DJ Larry Gogan said he was in shock and it didn’t sound like he was lying. Duffy arrived fresh from Liveline to converse in more unbuttoned style than before. He also – rightly – focused on Byrne’s formidable radio legacy.

So it continued. Even Mary Wilson, normally pleasingly immune to displays of on-air sentiment, let her guard down on Drivetime (RTÉ Radio 1, weekdays). “We, his RTÉ Radio family, are just so sad that this colossus has left us,” she said, noting the “complete silence in the Radio Centre when Joe Duffy made the announcement”.

In the midst of this emoting – by her standards, at least – Wilson also heard telling anecdotes about Byrne from his successors as Late Late Show host, Pat Kenny and Ryan Tubridy. Telling about Kenny and Tubridy, that is.

The latter recalled meeting Byrne, ostensibly to get tips on presenting the Rose of Tralee, but also to glean the old master’s advice on how to survive in the jungle of Montrose, the RTÉ headquarters. “That’s why I’m still here,” Tubs said, only slightly triumphantly. (How RTÉ employees must wish Byrne could counsel them through the current turmoil.)

Kenny, meanwhile, dwelled on his “friendly rivalry” with Byrne. He recounted a lengthy anecdote about how Sarah Ferguson, Duchess of York, once appeared on The Late Late Show rather than his own. Thank goodness that mystery has finally been cleared up.

Pat Kenny neatly captured Byrne’s approach by recalling his advice that if you’re not getting into trouble, you’re not doing your job right

In fairness, Kenny neatly captured Byrne’s approach by recalling his advice, “If you’re not getting into trouble, you’re not doing your job right”, a line that covers offended clerics, discomfited politicians and nervy managers in equal measure.

While Wilson and others dissected Byrne’s immense effect on Irish society, there were moments of overreach. Amid discussions about how his radio show provided both a platform and a sympathetic ear for Irish women in the 1970s and 1980s, Wilson asked former president Mary McAleese, who as a broadcaster herself was a sometime colleague of Byrne, if he was a feminist. McAleese’s response was to chuckle gently before diplomatically kicking to touch: “I wouldn’t dare to answer that.”

The mood on the following morning’s Pat Kenny Show (Newstalk, weekdays) was similarly affectionate and admiring. But during Kenny’s interview with Joe Duffy, the presenter also tentatively noted that Byrne could be “waspish”.

It’s also notable that Newstalk gave less wall-to-wall coverage to the death than RTÉ, the organisation where, as Duffy noted, Byrne was on a 14-week rolling contract (up until the 1980s) and could be told by management that all he did was talk to women. One inference gleaned from this was that Byrne’s famed loyalty to RTÉ was based on his relationship with the people there rather than any institutional admiration.

Gaybo’s fabled personal connection to people came up again on Tuesday, during Graham Norton’s appearance on The Ryan Tubridy Show (RTÉ Radio 1, weekdays). The London-based broadcaster told Tubridy he wished he was back in Ireland so he could talk to others who knew how Byrne’s career transcended mere television and radio. He also astutely noted that even as Byrne moved from celebrity interview to social issue on-air, it never seemed forced: “It was always him,” says Norton.

In the end, however, it was fitting that the last word should belong not to his colleagues and admirers but to Byrne and his wife Kathleen Watkins. Tubridy played an archive clip in which Kathleen surprised Byrne with an on-air call, remembering how he proposed to her. Gaybo’s response was to remind her laconically that he was almost in a plane crash the same day. Tubridy said the clip was like eavesdropping on a couple but also oddly romantic. Even then, Byrne sounded utterly like himself.

Others may talk about his astonishing legacy, but somehow only the sound of Byrne’s voice can do him justice.

On Thursday RTÉ’s director-general, Dee Forbes, appears on Morning Ireland (RTÉ Radio 1) to explain the sweeping cuts announced for the national broadcaster. There’s much talk about inadequate licence fees, challenging times and, ahem, tough decisions. But Bryan Dobson, interviewing her, cuts through the jargon with admirable rigour. “You talk about reducing ‘staff headcount’,” he says. “That’s people who are working, who have lives, families and all sorts of commitments.” For all the talk about voluntary redundancy, she admits that, “regrettably, we’ll probably be losing some people”. In a week when RTÉ makes a fuss about Gay Byrne’s legacy, it’s a depressing snapshot of how tatty its own has become.