Bono on Gaybo: ‘If you didn’t get on the Late Late, you didn’t feel you existed’ 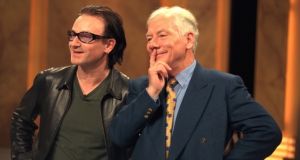 Bono and Gay Byrne on the Late Late Show

Gay Byrne’s Late Late Show was the national debating chamber the entire country watched as one, whether in excitement, disbelief, anger or incredulity. So it is bittersweet that it should take Byrne’s death to bring us all together in front of the television once again as RTÉ broadcasts a Late Late special in his honour.

The outpouring of emotion following Byrne’s passing at age 85 is testament to his enduring impact both as broadcaster and a force for social advancement. Under his watch, the Late Late functioned as a crack of light in the hermetic darkness of pre-Celtic Tiger Ireland. Now it hosts his wake.

The occasion is of course solemn yet also a celebration of a broadcaster whose like will not be seen again in this country.

Byrne was no sentimentalist. Would he have rolled his eyes at the prospect of a Late Late Show dedicated to his memory? It’s possible. Or perhaps he would have been quietly moved by the send-off he received as the great and good Irish entertainment gathered go pay homage.

It is quite the guest-list, with Bob Geldof, Pat Kenny, President Michael D Higgins, Andrea Corr and Tommy Tiernan among the many in attendance. Joining them in the audience is everyone who has ever worked for RTÉ ever. It’s the Montrose version of Where’s Wally, where everybody’s Wally.

“He made us laugh, he made us angry,” says host Ryan Tubridy, who said RTÉ was “raising a parting glass” to Byrne.

The two-hour special begins in black and white and with a frowning owl: the opening to the original 1962 Late Late Show. “It was a quite extraordinary,” says President Higgins, Tubridy’s first guest. “Gay was quite a modern man … people felt you had a safe, non-judgmental space where you could think in a non-judgemental way.”

“He was one of a kind – he opened up the conversation in this country … He changed everything ... He changed broadcasting,” says RTÉ director-general Dee Forbes.

“I wonder are we aware we bred two of the greatest broadcasters in the history of broadcasting, Terry Wogan and himself,” adds Mike Murphy, who then gently pokes fun at Byrne’s hyper-punctuality. This is the perfect excuse to reprise the old Live Mike clip of Murphy winding up Byrne by posing as an irritating Frenchman in Trinity College.

The anecdotes are arriving thick and fast now. Pat Kenny chimes in with a story about trying to kidnap Byrne as a “jape” in his student days. Later, there is a musical tribute featuring Andrea Corr, Donal Lunny, Mary Black, John Sheahan and others.

Bono phones in from Auckland, where U2 are touring. “If you didn’t get on his show you didn’t feel you existed. I remember this when U2 got dropped from what would have been our first appearance, I got the bus all the way out to Howth to explain the Late Late Show was making a big mistake.” The singer recalls asking the bus driver where Gay Byrne lived and then paying a house call, only to discover the host was out.

But real pleasure is watching old clips from the Late Late – the incensed caller condemning young women living with their boyfriends; the gasps as Byrne holds up a prophylactic. The views expressed were often reprehensible and incomprehensible, as were the haircuts and the knitwear.

We don’t really do national treasures in this country (national villains are more the speciality). Yet Byrne’s death has been a cause of genuine sadness and even grief.

Gay might have tutted and glanced at his watch as friends and colleagues lined up to reminisce. But he would have been secretly flattered too. And for those who have felt a genuine ache at his passing, the broadcast will have gone some way towards closure.