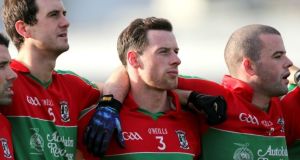 Passing It On: Ballymun Kickhams shows how good people gave young men in their community a sense of pride

As you may have guessed from previous pieces I have written, I’m not particularly knowledgeable about sportsball. I know some of “the sports”, of course. There’s Magic Legs (basketball), Large Man Hugs (rugby), Underpants Show (MMA), British Floor Ball (soccer), Big Mammal/Little Mammal (horse-racing) and Xtreme Family Avoidance (golf), but I’m not hugely invested in any of them.

It’s the story of how good people like the Dublin footballer Paddy Christie, Val Andrews and the late Tom O’Donoghue gave young men in their community a sense of pride when failed attempts at social engineering had left them marginalised and left out.

Paddy Christie’s wife, Marie, was so clueless about GAA – join the club – that she thought his Dublin jersey showed he worked in Arnotts

As the programme begins we see footage of Dublin’s terrible tenements, the Ballymun towers built to replace them and then of what happens when you do this without proper funding or community building. We see drug crime, poor services, buildings unrepaired. We also learn from footballers like Ted Furman, Davey Byrne and Philly McMahon about the feeling of connection they had there.

We learn about the origin of the team, but the focus is on the players who came through under Paddy Christie in the late 1990s. We meet coaches and supporters – people like Christie’s wife, Marie, so clueless about GAA (join the club, Marie) that she thought his Dublin jersey showed he worked in Arnotts. She became a committed chauffeur to carloads of kids. Davey Byrne was, she recalls, “a cheeky pup”. (Byrne agrees.)

There’s a lot in this about class. Christie brought in some boys from the more salubrious Glasnevin, next door, with whom the Ballymun boys sparred and then bonded. Their team was disrespected. Ted Furman was called racist names. “They’re only doing this because you’re very good,” McMahon told him.

The whole team were called “scumbags” often by grown adults connected with other teams. They tell a story about Byrne chasing after a posher team with a huge branch torn from a bush when he felt insulted. They were dealing with a lot. There were sometimes used syringes on their pitch. Some players had drug addiction in their families and some of them drifted down darker paths. Christie still sees some of those boys around and thinks, Could I have done something else there?

Yes, there’s plenty about the game here, but Passing It On is really about how young people need a place to belong and someone to champion them

He did an awful lot. He and the other coaches ensured that the boys always had the best gear, that they knew they were good, that they felt pride in themselves. And they worked hard. Byrne and McMahon went on to earn college degrees they attribute to the support and encouragement of the club.

Yes, there’s plenty about the game here – championships dominated and All Ireland medals won by Kickhams players – but this is really about how young people need a place to belong and someone to champion them. Politicians love trying to fix social problems hierarchically with big ideas from think tanks and visionary architects. But build seven towers or knock seven towers: without real equality of opportunity the drug problems and inequality remain.

Communities need to be properly funded and built from the inside out, built by activists and volunteers like Paddy Christie and the other coaches at Ballymun Kickhams. This is a love letter to that. It’s enough to make me watch GAA (aka Localised Sky Ball).

Óró…: This immersive production is a feast for the senses
7