In a week of tributes to John Hume, a 12-year-old has the biggest impact

Radio review: ‘He helped solve the sectarian conflict as it was happening,’ Jayden Nixon says 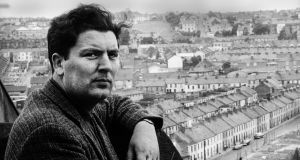 John Hume, in Derry in 1970: ‘He was a very important man. He brought peace in our time,’ Morning Ireland heard from one young contributor. Photograph: Leif Skoogfors/Corbis Historical via Getty

“John Hume was an important man. He helped solve the sectarian conflict as it was happening,” 12-year-old Jayden Nixon says at the end of Aengus Cox’s report from Derry on Tuesday’s Morning Ireland (RTÉ Radio 1, weekdays).

In a week of tributes and warm memories it is the simplest, most straightforward commentary on Hume’s death. Former taoisigh and presidents, along with international statesmen and -women, line up on the airwaves to honour the winner of the Nobel Peace Prize. But it is the voices of young people in Derry, including the future politician Jayden, that have the most impact. “He did some good things for Catholics,” says one. Another adds: “He was a very important man. He brought peace in our time.”

Such simple sentiments resonate in a week when the postponement of phase four of the lifting of Covid-19 restrictions also dominates the airwaves.

The world is looking at Ireland, going, ‘Why do they have this problem with tampons?’ I think it’s important we say, ‘No, we don’t’

Sounding almost like a caricature of himself, the Independent Kerry TD Michael Healy-Rae, himself a pub owner, is apprehensive on Tuesday’s Pat Kenny Show (Newstalk, weekdays), calling on the Government to trust the Irish people “to act responsibly” in pubs.

Kenny is content to let the TD appeal for the rights of small pub owners with very little interjection or prompting. Healy-Rae calls on the Cabinet to “take a breath” (which he does not appear to need to do himself) before making a decision on the opening of pubs.

On the following morning’s Today with Sarah McInerney (RTÉ Radio 1, weekdays) he challenges the public-health expert Dr Gabriel Scally, who says that alcohol is the virus’s best friend and that he has never had to shoulder his way to the counter to get a drink in a restaurant.

Like Kenny, McInerney wisely holds back and lets the two men make their arguments, with the Kerry TD expressing shock and disappointment at the deferral of the reopening of wet bars. Opening pubs would protect people, he maintains. There is no comparison between large pubs in built-up areas and small rural pubs. Pub owners are highly responsible and will do everything to protect the public, he adds.

In her final days presenting Lunchtime Live (Newstalk, weekdays), before heading to the station’s breakfast show, Ciara Kelly continues her campaign against the Advertising Standards Authority for Ireland’s response to complaints about a television advert for tampons.

Last week the presenter had called on listeners to donate sanitary products in protest at the banning of the advert in its current form, pledging to bring the items to the ASAI to illustrate the scale of the backlash (with the products to be donated to a period-poverty charity afterwards).

Overwhelmed by the response, Kelly asks for more, promising to deliver the 10 sacks received so far to the ASAI.

The authority has never seen anything like the backlash to this decision, she claims – and would no doubt be delighted to see them arrive, she adds, tongue firmly in cheek.

She takes the campaign to BBC Radio 4 on Monday, to talk about the controversy for British listeners. “The world is looking at Ireland, going, ‘Why do they have this problem with tampons?’ I think it’s important we say, ‘No, we don’t.’”

While some might find Dave Fanning an acquired taste, there is something infectious about his enthusiasm, and he appears to be genuinely interested in every topic on his show

The niggling question of the widespread use of the word “staycation” is examined on Drivetime (RTÉ Radio 1, Tuesday), with Liam Geraghty reporting to Philip Boucher-Hayes on the history of the term and how open it is to interpretation. In an engaging and lively discussion, complete with expert opinions, the topic is examined in great detail before arriving at the amicable conclusion that while language may evolve and change, the important thing is that people holiday at home.

Language and accurate definitions crop up again in an interview with the author John Boyne on Tuesday’s Pat Kenny Show, where the genial writer is happy to join in the laughter after it emerged that he accidentally included monsters from a popular video game in his new novel.

One section of A Traveller at the Gates of Wisdom, a historical novel set across more than 2,000 years, features a list of ingredients used by a character who’s attempting to poison Attila the Hun. As social-media users pointed out, the ingredients were also used by Zelda, a character in the video game Breath of the Wild.

Boyne, who had been looking online for potential ingredients, says they will stay in the novel, but when the paperback version comes out Zelda will be added to the acknowledgments page.

The holiday mood continues with Anton Savage’s bizarre stories of the week, on the Dave Fanning Show (RTÉ 2fm, Sunday). Savage takes great relish in regaling Fanning with the plight of the “scrotum frog” of Lake Titicaca. The “rare frog, a rattling frog”, is endangered by the polluted waters of the world’s highest lake, which sits on the border between Bolivia and Peru.

While some might find Fanning an acquired taste, there is something infectious about his enthusiasm, and he appears to be genuinely interested in every topic on his show. From bantering with Savage about the glee with which he pronounces Lake Titicaca to a chat with Mike Sheridan about US presidents depicted on screen, the veteran presenter is engaging, and his own extensive knowledge of film shines through in the latter segment.

Later, in a warm discussion with the author Anna McPartlin about her latest novel, The Last Days of Rabbit Hayes, the two chat about how McPartlin is enjoying working from home during lockdown. The author’s fascinating personal history is touched on with sensitivity; when she repeatedly asks, “Do you know what I mean?” Fanning, with great patience, replies, “Yes, I do.”

The racing commentator and former jockey Ted Walsh is Des Cahill’s guest on Des’s Island Discs (RTÉ Radio 1, Tuesday), which, as the title suggests, borrows from Radio 4’s Desert Island Discs to ask its guests to talk about their lives and pick their favourite pieces of music.

Walsh is a great talker, but, as he admits himself, not very musical. As a Kildare resident he “eats, drinks, sleeps Christy Moore”, but his first musical choice is Don McLean’s American Pie. Why? It’s the party piece of his son, “young Ted”, whom he describes as “a nice fella”.

If he’s singing the song then it means it’s a celebration, Walsh explains. “The fact that he sings it makes it special.”

Paternal pride comes in many forms.

Mick Heaney is away

Culture Night 2020: From a Liffey tour to Cork slang lessons, 30 events not to miss
3

Remembering Jimi Hendrix 50 years on: the guitar god and the Irish connection
6

Sex and the Irish: We were always a law unto ourselves
9