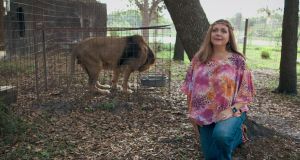 Carole Baskin, one of the stars of the hit Netflix docuseries Tiger King, has been sued by the family of her ex-husband for information in his 1997 disappearance.

The suit, filed in Hillsborough county, Florida, by Jack Donald Lewis’s three surviving daughters, is an attempt to force Baskin to submit information on the record, as it demands the defendants – Baskin, Tiger King subject Kenny Farr and the woman listed as a witness on Lewis’s will – turn over electronic device data, diaries and investigative material related to Lewis. It also offers a $100,000 reward for any information on his disappearance.

Baskin became a household name among many Netflix viewers this spring when Tiger King, a series centred on a feud between Baskin and fellow big-cat sanctuary owner Joe “Exotic” Maldonado-Passage, exploded as the viral hit of early quarantine in the US. The series encouraged speculation on Baskin’s role in Lewis’s disappearance, a day before a scheduled trip to Costa Rica. He was declared legally dead in 2002.

Baskin, who received most of Lewis’s $6m estate and ownership of their sanctuary, Big Cat Rescue Corporation, has vehemently denied any involvement in his disappearance.

At a press conference in Tampa, Florida, on Monday, Lewis’s daughter Gale Rathbone said interest generated by Tiger King spurred action in the case. “Amazingly, our little family tragedy has become your tragedy,” she said. “Our search for closure and truth has become your mission also.”

Baskin told the Associated Press: “It’s been my policy not to discuss pending litigation until it’s been resolved.

“I had told some news outlets that I thought the press conference on August 10th was just a publicity stunt, but at that time was not aware there would be pending litigation.” – Guardian

Indecisiveness led to home of The O’Rahilly being demolished
10