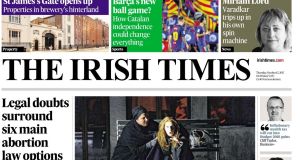 This year’s awards span 25 categories, ranging from business and politics to showbiz and sport

The Irish Times has received more nominations than any other newspaper in the shortlist for this year’s national Journalism Awards, with more than twice as many nominations as any of its rivals. The annual awards, run by the newspaper representative body Newsbrands Ireland, aim to celebrate “the quality original journalism that makes the newspaper an indispensable part of Irish daily life”.

This year’s awards span 25 categories, ranging from business and politics to showbiz and sport, and are open to journalists working for all national newspapers published in the State. Irish Times journalists achieved 34 nominations in total, with particularly strong showings in the Features (Broadsheet), Foreign Journalism and Digital Excellence categories.

David Labanyi was nominated for Scoop of the Year for his work on the Garda breath test scandal, while Carl O’Brien was recognised for his investigative reporting into allegations of misconduct at the University of Limerick. There were also nominations for Simon Carswell’s news analysis, and for feature writing by Jennifer O’Connell and Davin O’Dwyer.

For her reporting for The Irish Times on the Syrian refugee crisis, Sally Hayden, was nominated in the Young Journalist of the Year category.

The winners of this year’s awards will be announced on Thursday, November 2nd at the Mansion House in Dublin.