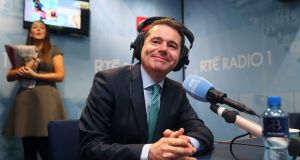 On Wednesday, as Sean O’Rourke finishes his Q&A session with Minister for Finance Paschal Donohoe, he sums up proceedings with succinct if brutal honesty.

“There was no excitement, there was no drama, you had no surprises,” O’Rourke says ruefully. Admittedly, the presenter is referring to the budget delivered by Donohoe the previous day, but he might as well be describing the Minister’s performance on his show (Today with Sean O’Rourke, RTÉ Radio 1, weekdays).

Donohoe is there for his Q&A phone-in session with the public, a longtime budget day ritual for finance ministers. But on this showing at least, it’s a custom nearing obsolescence, as the Minister fields the questions with polished if bland competence.

It makes the listener pine for the bruising appearances by the likes of Michael Noonan and Brian Lenihan during the good old days of austerity, in much the way that old Londoners are nostalgic about the Blitz.

That’s not to say there aren’t tricky questions. One caller, Malcolm, wonders why his €5 benefits increase is being delayed by six months, when his rent has already increased by €100 a month.

“You’ve done a lot to get the country off the floor, but done nothing for those who are still on the their knees,” Malcolm says.

Tellingly, Donohoe accepts the plaudit – “Thanks for acknowledging that,” he says – but then loftily informs Malcolm that there are other callers who have needs too.

Lorcan, a Cavan farmer, raises concerns that the increased 6 per cent rate on commercial stamp duty also applies to agricultural land. The Minister tries to reassure the caller by highlighting a 1 per cent rate in “consanguinity relief”. But Lorcan is unimpressed by the compensatory measures in “that big word you’ve used there”, sparking audible chuckles from Donohoe, who wriggles off the hook with a glib remark about trying to pronounce the word in his budget speech.

O’Rourke, for his part, doesn’t unduly press his guest, largely ceding the field to his callers. Meanwhile, for all his admissions of fallibility, Donohoe gives off the same self-satisfied air that has marked many a ministerial radio appearance since Leo Varadkar became Taoiseach.

Just as Donohoe trots out the smug phrase cod-branding Ireland as the “Republic of Opportunity”, so too does Regina Doherty, Minister for Employment and Social Protection, when she appears on Morning Ireland (RTÉ Radio 1, weekdays) just before the budget. Host Gavin Jennings interviews Doherty about the impact of cuts to lone-parent family benefits, which used to end when the youngest child turned 18, but now cease at age seven.

The Minister stoutly defends the policy, referring to a new report that employment has increased among single parents. She manoeuvres past Jennings’s assertion that the policy has actually increased the risk of poverty – “Let’s not split hairs,” Doherty says – preferring to say it has reduced “welfare dependency”. This prompts an obvious rejoinder from Jennings: “If you take away someone’s welfare payments they can’t be dependent.”

But Doherty is undaunted. Her aim to promote decent job prospects for lone parents is laudable, but the language she uses about a policy which even she admits has “mixed results” is gormlessly upbeat. Empty buzzwords like “ambition”, “confidence” and, yes, “opportunity” abound.

Doherty also approvingly notes that employment gets single mothers “out of their houses”, unwittingly echoing Norman Tebbit’s “on your bike” advice to the unemployed.

At the end, Jennings reminds Doherty of a remark she previously made about welfare rates – “Jaysus, I couldn’t live on €198 a week” – and asks if she could do so on €5 more. Doherty responds by snippily asking if Jennings knows what is in the budget, as she doesn’t. (As expected, an additional €5 payment is later announced.) It’s a disingenuous coda that rather sours Doherty’s sunny spin.

One possible response to the political pantomime of budget day is simply to ignore it. On the Ray D’Arcy Show (RTÉ Radio 1, weekdays), the host sounds breezily dismissive as he describes the atmosphere in the news department: “It’s sort of like All-Ireland day,” he chuckles. Then again, D’Arcy’s airtime has been truncated by 40-odd minutes to facilitate broadcasts from the Dáil, so he could just be annoyed at that.

Though maybe not. D’Arcy hears the story of Tracy McGinnis, a single mother of two children who is trapped in the private rental market, and contrasts her situation with the grand speeches in Leinster House.

A former journalist and therapist, American-born McGinnis is now a full-time carer, looking after her profoundly disabled son Brendan and his younger brother Declan.

The details of Brendan’s life-limiting condition are heart-rending, as McGinnis outlines the medication and constant care he requires from her: “I had to leave behind my career and, in many ways, myself as an individual.” But their bond is palpable: she says that Brendan “teaches unconditional love”.

McGinnis’s accommodation situation also causes distress. In her private rented house in Kildare, there isn’t enough room for Brendan’s wheelchair to move properly, while it is 45 minutes away from Declan’s school in Kilkenny, where she is on a 15-year waiting list for public housing.

Meanwhile, her application for a council-backed low-interest mortgage has been turned down because her income comes from welfare rather than employment, despite the security ownership would bring. She paints a picture of quiet despair, all the worse because the solution is tantalisingly obvious yet out of reach.

It’s only one story, but it’s an indictment of our supposed “Republic of Opportunity”. As D’Arcy says, “If you want to get a measure of a society, see how it treats its most vulnerable.” Who says there’s no drama on budget day?