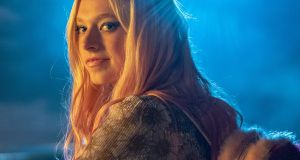 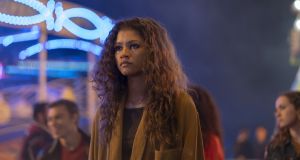 As Rue, Zendaya reminds us of her blinding star power

HBO’s coming-of-age drama Euphoria is a shocking, unnerving and often mesmerising journey into the dark side of adolescence. Among its eye-popping moments are scenes of explicit drug-taking, emotional carnage and a sequence in which a girl at a party scares away a shirtless jock by slashing her arm with knife.

What’s arguably most disturbing, however, is the how showrunner Sam Levinson makes teenage self-destruction look weightless and beautiful, like a Billie Eilish or Halsey video or a TikTok remake of Twin Peaks. He depicts trauma as maximalist pop-art. Whether you’re a teenager, adult, parent or someone open to the idea of one day becoming a parent, it will send your jaw crashing earthwards.

After a controversial debut season in 2019, Euphoria returns to Sky Atlantic on Monday, January 25th, with the second of two special instalments, each shot under lockdown conditions and catching up with a key character. Hold on to your hat. Or, if you’re a character in Euphoria, to the MDMA stash you hide from your parents.

In Euphoria everyone under the age of 20 speaks like a Bret Easton Ellis character. They’re cynical, self-possessed, hedonistic. Nobody is shy or uncertain or stuttering and gawky

The first of those specials, Trouble Don’t Last Always, followed in real-time a meeting between cocaine-addict Rue (the former Disney teen star Zendaya) and her Narcotics Anonymous sponsor Ali. With the camera peering at the duo through a diner window, the episode unfolded like a cross between an Edward Hopper painting and a Nicolas Winding Refn movie. The tableaux – two broken people talking over pie – was All American, but the colours are saturated, the dialogue heightened.

Part two, F**k Anyone Who’s Not a Sea Blob, turns to Jules (Hunter Schafer) – the girl who drew the knife and cut her arm at the party. Filmed with strict social distancing protocols, it presents a stark contrast to the very first episode of Euphoria, in which Jules made a jolting entrance when gatecrashing a party.

It was eye-opening. But was it new? The idea of teenagers as emotional disaster zones negotiating an amoral world goes at least as far as Bret Easton Ellis’s 1985 novel Less Than Zero. Every now and then it resurfaces in a different guise – in Skins on Channel 4, for instance. There is also an entire genre of YA novels about teens trapped in chemical addiction: Junk by Melvin Burgess or Drop by Katie Everson.

What sets Euphoria apart is that it makes this downward spiral look haunting and beautiful. When Rue is caught up in a cocaine swirl, she is carried away into a world of glitter and bliss. Watching these scenes I am reminded – along with Billie Eilish videos – of the photographer of Todd Hido, whose portraits of American suburbia have been described by the Guardian as “replete with voyeuristic undertones and implied narrative”.

Levinson, it turns out, was indeed inspired by Hido and his vision of the burbs as a sort of sodium-lit Neverwhere. “Suburban landscapes that felt almost sci-fi-ish in a way where you had these kind of striking cyans and golds,” he told Entertainment Weekly “It was sort of a way to express the kind of alien nature of the world when you’re young.”

The other question is whether Levinson, a 36-year-old former child actor who fell into drug abuse, is reflecting or distorting the trials of growing up. His father is filmmaker Barry Levinson. It feels safe to assume Levinson jnr’s formative years were materially privileged and not at all reflective of the average American teenage experience.

“Somewhere around the age of 16, I resigned myself to the idea that drugs could kill me, and there was no reason to fight it,” he told the Hollywood Reporter. “I would just let it take me over and I’d made peace with that. By the time I was 19, I was in rehab, I’d checked in and was trying to get off of opiates and onto a more productive drug like crystal meth.”

A case can be made that the real addiction causing teenagers to unravel is social media rather than drugs. Euphoria, however, has no interest in interrogating that: it isn’t sexy enough

In Euphoria – which is a remake of a 1990s Israeli drama – everyone under the age of 20 speaks like a Bret Easton Ellis character. They’re cynical, self-possessed, hedonistic. Nobody is shy or uncertain or stuttering and gawky: the default setting for at least 30 per cent of teenagers in the real world. Levinson’s characters are all jaded old souls trapped in youthful bodies unblemished by their constant partying.

“I think that’s what makes this generation different,” Levinson told Entertainment Weekly. “It’s a f**king totally different world. There is no compass. There is no road map. There is no one who can provide any advice that is actually that applicable. When 60-70 percent of all interpersonal conversations and relationships exist through text messaging or social media, it’s hard to get advice from a parent who didn’t grow up in that world.”

But as commentators have pointed out, technology doesn’t really intersect meaningfully with Levinson’s characters. None of them really seems au fait with social media. Unlike actual teenagers, they don’t spend all their time gawping at their phones or at YouTube.

A case can be made that the real addiction causing teenagers to unravel is social media rather than drugs. Euphoria, however, has no interest in interrogating that: it isn’t sexy enough.

Rue’s woes are particularly old fashioned: she suffers from ADHD, her father died when she was 11, she’s way too cool for everyone in her life. Meet Holden Caulfield with a cocaine habit.

As a document of the life lived by modern teenagers, Euphoria is thus arguably flawed in all sorts of ways. And with an NC-17 rating in the US, teens properly speaking shouldn’t be watching it in the first place. Who, then, does it see itself speaking to?

“The true audience of Euphoria … isn’t really teens,” wrote Emily VanDerWerff in Vox in 2019.”It’s not even the parents of teens. No, the true audience for Euphoria is parents of kids who are about five to 10 years old, who still have relatively good relationships with those kids but can see the storm clouds on the horizon…very little of the show actually seems as if it’s tapped into the way kids live in 2019. It’s disappointing.”

She’s right. Euphoria is exhilarating to sit through – those colours! that soundtrack! But to regard it as a window into modern adolescence is to give it too much credit and perhaps misunderstand it slightly. Levinson has made an intensely personal drama about his struggles with substances.

And, as Rue, Zendaya reminds us of her blinding star power. The results are dark, dazzling and quite distorted – real life as seen through a carnival mirror.

Euphoria: F**k Anyone Who’s Not a Sea Blob is on Sky Atlantic on Monday, January 25th, at 9pm