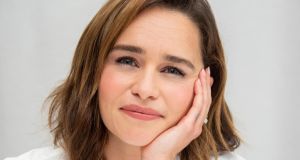 Emilia Clarke: ‘I’ve had fights on set where I’m, like, ‘No, the sheet stays up,’ and they’re, like, ‘You don’t want to disappoint your Game of Thrones fans.’ And I’m like, ‘F*** you.’ ” Photograph: WireImage/Getty

Emilia Clarke has revealed she felt uncomfortable acting in some of her nude scenes in Game of Thrones.

The actor played queen Daenerys Targaryen in HBO’s sprawling epic, which became notorious for its explicit portrayal of sex and violence. Clarke, who was 23 when she started filming Game of Thrones, said she would be in tears before shooting certain “terrifying” nude scenes.

Speaking on the actor Dax Shepard’s podcast Armchair Expert, she said: “I took the job and then they sent me the scripts and I was reading them, and I was like, ‘Oh, there’s the catch!’

“But I’d come fresh from drama school, and I approached it as a job: if it’s in the script then it’s clearly needed. This is what this is and I’m going to make sense of it and that’s what I’m going to do and everything’s going to be cool.

The British actor, who is now 33, said she had “imposter scene times a million”, but credited her Game of Thrones costar Jason Momoa with protecting her. On the podcast, Shepard brought up a season one scene in which Momoa’s character, Khal Drogo, “virtually rapes” Daenerys on their wedding night. “He was crying more than I was,” Clarke replied.

Jason Momoa was always, like, ‘Can we get her a f***ing robe? She’s shivering!’… He was so kind and considerate

“It’s only now that I realise how fortunate I was with that, because that could have gone many, many, many different ways,” she said. “Because Jason had experience – he was an experienced actor who had done a bunch of stuff before coming on to this – he was, like, ‘Sweetie, this is how it’s meant to be, this is how it’s not meant to be, and I’m going to make sure that that’s the f***ing gaze.’ He was always, like, ‘Can we get her a f***ing robe? She’s shivering!’… He was so kind and considerate and cared about me as a human being.”

Since Game of Thrones, she said, she has become “a lot more savvy” with what she’s comfortable with, and with the level of nudity that’s needed for a scene. “I’ve had fights on set before where I’m, like, ‘No, the sheet stays up,’ and they’re, like, ‘You don’t wanna disappoint your Game of Thrones fans.’ And I’m like, ‘F*** you.’”

Representatives for HBO and Game of Thrones’ creators, David Benioff and DB Weiss, have been contacted for comment. – PA, agencies