Does RTÉ think it takes three women to do one man’s job? 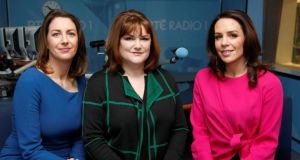 The arrival of Sarah McInerney, Katie Hannon and Fionnuala Sweeney as the new hosts of The Late Debate (RTÉ Radio 1, Tuesday-Thursday) sends out mixed messages. Each woman has such journalistic pedigree and broadcasting experience that having just one of them in the role would be welcome. As it is, McInerney, Hannon and Sweeney take turns to anchor the panel show each night, replacing the previous host, Cormac Ó hEadhra. But if the move is meant to show RTÉ’s new-found commitment to gender equality it’s a more ambivalent gesture, creating the unfortunate impression that Montrose management thinks it takes three women to do one man’s job.

Not that the presenters will necessarily want to replicate Ó hEadhra’s wildly belligerent style, which didn’t always result in informed argument. McInerney, who never shied from a fight as presenter of Newstalk Drive, seems the most likely of the troika to get into a scrap with her guests; indeed, she expressed her willingness to do so to her RTÉ colleague Sean O’Rourke two weeks ago.

Her first show, on Tuesday, starts spiritedly. Addressing the surge in rental costs, she asks the Fine Gael Senator Martin Conway to comment on Leo Varadkar’s statement that the policy of “predictability measures” for rent pressure zones is working. “He has to be taking us all for fools with a statement like that,” she says, irritation in her voice. “I wouldn’t agree with you, Sarah, and the best of luck with the new programme,” Conway replies, managing to sound both patronising and sycophantic.

It’s a promising start, but the programme soon settles into a reasonably civilised exchange of views between the panellists, with some interesting ideas thrown in. McInerney corrals her guests well, more concerned with finding out their positions than with starting trouble, apart from the entertaining tussle with Conway about the Taoiseach’s apparently insouciant approach to the rent crisis. Even more impressively, she helms a discussion of child internet safety without any of the emotive baggage that usually comes with the issue.

Fans of the slot’s old fight-night atmosphere may be more alarmed by Hannon’s tenure on Wednesday, when nearly 20 minutes are devoted to one guest, Maeve O’Rourke of the Irish Council for Civil Liberties. O’Rourke outlines the State’s failure to implement the redress scheme for survivors of the Magdalene laundries. It’s a shameful litany of official indifference, laid out in forensic detail, but it hardly qualifies as debate. Even when the other panellists have their say they sing, unsurprisingly, from the same sympathetic hymn sheet.

Hannon, an old RTÉ current-affairs hand, tries to inject some dissent, by pressing the Fine Gael TD Colm Brophy on the Government’s lethargy about the issue.

It’s a fine debut by Hannon, holding those in power to account clearly and calmly, as public-service broadcasting is meant to. Similarly, McInerney has already left her own quietly forceful stamp on the show. (Sweeney’s edition, on Thursday, airs after this column goes to press.) At this rate one of them might even be given their own daytime show some time.

The catastrophic consequences of bureaucratic decisions are vividly illustrated on Liveline (RTÉ Radio 1, weekdays) when Joe Duffy devotes several editions to the distressing stories of people affected by the Government’s decision to withdraw Versatis pain-relief patches from the medical-card and drug-payment schemes, leaving users to pay their full cost. The decision was taken on clinical grounds: Duffy archly notes the Department of Health wanted “a higher level of supervision of the administration of this drug, so what they did was simply stop it for everybody”. But the medical rationale for the move is severely tested by the weight of harrowing anecdotal evidence from Duffy’s callers.

One by one people recount their experience of chronic pain. Many find their suffering so unbearable that they have attempted to take their lives. One man, Eoin, tells of his suicidal desperation before his wife urged him to try the drug. “It was like being touched by an angel,” he says. Another caller, Sarah, similarly has pain so debilitating that it has affected her mental health, but her medication has helped her, until now. “Do the Ministers want a higher suicide rate? Because that’s what will happen,” she says, in obvious despair. Barbara, meanwhile, is cutting her last pain-relief patch into quarters, the better to prolong it. The stories create a grim picture, and that’s just Monday’s show.

Duffy, lest he seem an unscientific flat-Earther, also hears from GPs baffled by the decision. One problem, he hears, is that pain is hard to measure, given its subjective nature. But for the presenter the clinching argument comes from his callers. “I’m prepared to believe real stories from real people in real pain,” he says, with grim determination. On occasions like this Duffy’s show truly is a lifeline.