Dancing with the Stars: Darren Kennedy exits with a shameless self-promotional speech

Review: Emotions were running high with biographical blubbing the unofficial theme of show

Stylist Darren Kennedy is the latest celebrity to be voted off Dancing with the Stars. Video: RTÉ 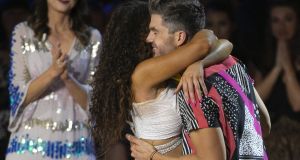 Darren Kennedy and Karen Byrne after they were voted off Dancing With The Stars. Photograph: Kyran O’Brien

Dancing With the Stars opens with a tango to Michael Jackson’s Beat It but in the end it’s television presenter and stylist Darren Kennedy who receives his marching orders.

“I’ve had an amazing journey,” says Kennedy, who – oi, cheeky ! – takes the opportunity to shamelessly plug his grooming products company. But he at least spares us the the Holly Carpenter death glare to which she Holly Carpenter treated viewers when she was ejected a week previously (some of us still see it when we close our eyes at night).

One month in, RTÉ’s ratings gobbling hoof-fest has kicked off its slippers and is down to business. And it’s becoming ever clearer who is in the running and who is fox-trotting towards the exit.

Undisputed leader of the pack is TV presenter Mairéad Ronan. Dabbing her eyes, she dedicates her contemporary ballroom dance with John Nolan to her late mother and her three children.

She hadn’t, she explains in a video diary, allowed herself to mourn her mum until she became a parent herself. With an introduction like that, her contemporary ballroom to Take That’s Rule the World can’t disappoint and she duly sets everyone’s hairs on end. Upon hearing Gary Barlow’s voice many of us will have previously experienced the urge to run sobbing from the room – but this time, it’s different.

“You were my shining star tonight,” says judge Julian Benson. Ronan duly pirouettes away with a blockbuster 25 (including a knockout nine from Benson).

Also in contention, surely, is actor Clelia Murphy, here performing a Viennese waltz to the unlikely strains of the Fair City theme. The soap she called home for more than 20 years has a special place in her heart, she reveals, as it provided a steady pay-cheque when she was a young single mother. Her reward is a nonsense 21 (not that this prevents her placing in the bottom three).

Biographical blubbing is the unofficial theme of the episode, with each of the nine remaining participants chosing music woven into the tapestry of their life. How weirdly encouraging it is discover that for footballer Dennis Bastick that special song is The Power by Snap!

Equally from leftfield is ex-Love/Hate man Johnny Ward’s choice of Pictures of You by Boyzone. This harks back to his first taste of showbusiness and his days pretending to be Stephen Gately in a covers act.

“I also want to be in a Boyzone tribute band,” chimes presenter (and sometime Westlife crooner) Nicky Byrne in an uncharacteristic display of wit. “Didn’t work out.”

Formerly the golden boy, Ward is however admonished by judge Loraine Barry for “jumps and splits and all that” during his cha cha. “You can do it –but it’s tough love tonight from me,” she adds. Still, he lives to strut another day with a 20.

Likewise stumbling slightly is country singer Cliona Hagan, who romps through her American smooth to Shania Twain’s line-dancer manifesto Man I Feel Like A Woman. As with Johnny Ward, the one-time overachiever she doesn’t quite bask in raves, though.

Judge Brian Redmond compares her hopscotching unfavourably to his mother’s cooking – a metaphor stretched all the way to snapping point – and Barry has issues with her “lifts”. Nonetheless, she notches up a not-at-all-shabby 22.

One surprise is the return of pro-dancer Curtis Pritchard, who had to cry off this season after suffering an injury over Christmas. He seems fighting fit – or at least his quiff does. If his hoofing is half as impressive as his hair, which shines like all the beacons of Gondor blazing at once, the future is bright.

The opening Michael Jackson routine is courtesy of Fred Cooke, the happiest plodder on television who reprises his jolly Honey Monster routine and scores a respectable 17 (mmmm… yeah but isn’t it a bit weird paying homage to Jacko given the recent controversy swirling around him?).

Peter Stringer, rugby star and a man comprised mostly of protein and stage fright, meanwhile strikes a note of pre-Valentines Day gloopiness by offering up his Viennese waltz to wife/best friend Debbie O’Leary.He twirls back and forth with dance partner Ksenia Zsikhotska to no great avail – a bit like Ireland up against England really. Still, the sentiments are clearly from the heart and the panel award a thoroughly non-cynical 19.

The unofficial theme of the week is, as already pointed out, tugging at the heart-strings. They are yanked with aplomb by Kennedy, who recalls his struggles as a shy adolescent and how Ricky Martin helped him find his identity.

His performance of the salsa to Martin’s Maria is thus presented as a catharsis – though the Hollywood ending is ruined by Brian Redmond, who picks up on the “frenetic” footwork. Alas, with the standard improving week by week, Kennedy’s enthusiastic stomping just didn’t cut it.

The true lump in throat moment is courtesy of Young Offenders actress Demi Isaac Oviawe, accompanied by Kai Widdrington. She dedicates her rumba to Luther Vandross’s Dance With My Father to her late father, who died in 2016.

“I want to make my dad proud,” she says and by the end she is in tears. “You’re giving us all the feels” says co-host Jennifer Zamparelli who looks like she’s about to start bawling too.

Covid-19 has proved worse than the film-makers imagined
8