Dancing with the Stars: Holly Carpenter voted off with a chilling look

Review: No Hollywood ending for ‘devastated’ Carpenter on movie night

Holly Carpenter is the second celebrity to be voted off RTÉ's Dancing with the Stars. Video: RTÉ 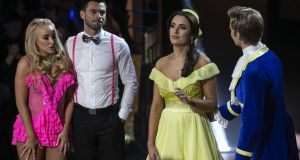 “I’m gutted – I’m so devastated”: Holly Carpenter (in yellow) with Trent Whiddon after they were voted off Dancing with the Stars. Photograph: Kyran O’Brien

It’s movie week on Dancing with the Stars but there’s no Hollywood ending for Holly Carpenter. Instead it’s a case of frights, cameras, action for the former Miss Ireland, who, after a public vote, becomes the second celeb ejected from this year’s competition.

“I’m gutted – I’m so devastated,” says Carpenter, standing beside her dance partner Trent Whiddon. She adds that she has really enjoyed herself “and all that stuff I’m supposed to say… but yeah, I’m gutted.”

She comes across, its fair to state, as utterly unimpressed at flunking out after just four episodes. If looks could chill, presenters Nicky Byrne and Jennifer Zamparelli would be lightly dusted in ice.

There are harsh words for Carpenter from the judges, despite her graceful foxtrot to Beauty and the Beast (that heart-warming tale about bestial Stockholm syndrome and self-aware crockery).

Her cardinal sin, goes the consensus, is prioritising flash over substance and not committing sufficiently.

“You’ve done a pretty good job,” says judge Brian Redmond. “But I want to see Holly from week one back...attack those performances for us even more”.

So sad to say goodbye to @Holly0910 & Trent! We will miss you! pic.twitter.com/esiuE6PTXR

“I want to see Holly the dancer, not Holly the model,” adds Loraine Barry. The big twist at the end is…we won’t be seeing any more of either.

Elsewhere silver screen glitter abounds. Early frontrunner Cliona Hagan is nifty in pink as she and dance partner Robert Rowinski jive to Perfect Day from Legally Blonde. And the cheese is slapped on with a pitchfork by footballer Denis Bastick and Valeria Milova, doing a po-faced tango to Danger Zone from Top Gun.

That was a movie about pampered show-ponies pulling off ridiculous stunts while the ultimate winner of the rivalry is never in doubt. So heavens knows who at RTÉ thought it would be a good fit for a ex-Dublin footballer. “Get that head out and don’t dip down,” suggests Loraine Barry – surely good advice in any situation. Bastick seems a stand-up chap. Alas, he can’t quite shake that frozen grin – the sort you usually see pasted across the faces of audience members on Up For the Match.

Easier to warm is professional Jolly Man Fred Cooke. He and Giulia Dotta tip-toe through their American Smooth to the antediluvian strain of the Pink Panther Theme. The biggest surprise is that he’s shaved his beard, leaving behind only a worried-looking caterpillar nestled above on his top lip. His reward is hearing from Brian Redmond that his footwork is “atrocious” (boo, hiss says Twitter).

Your heart has meanwhile gone out to Leaving Cert student and Young Offenders star Demi Isaac Oviawe. If the presenters aren’t mangling her name – come on it’s only three words, which makes it about as long as the lyrics to the latest Westlife single – she has been enduring the condescending non-praise of the experts.

But she pulls out of her tail-spin with a high altitude salsa to One Night Only from Dreamgirls. “You’re going in the right direction,” says Redmond. Julian Benson awards her a “Demi-licious” eight, her highest score yet.

Also bobbing along in the middle is the official God Among Men Peter Stringer. He continues to provoke swoons and shrieks (and that’s just from Nicky Byrne). Nonetheless, as a competitive dancer he is – consults big book ‘o rugby cliches – not yet competitive at the breakdown, as demonstrated by his shuffling paso double to Un Poco Loco from Coco (no idea).

That said, Stringer is endlessly chipper and has a serious claim to the title of year’s best sport – very gamely arriving at the Bray studio with a cartoon black eye and shrugging off a wardrobe mishap as his cape goes walkabout.

The presenters are their usual selves. Zamparelli is still trying too hard – one of these days a joke of hers will hit its target. And Byrne, with quiff and twitchy marionette smile, looks like Jedward: the Middle-Aged Years.

One of last week’s talking points was ex-Fair City actress Clelia Murphy being told to “tuck in her bum” by Brian Redmond. She waggled in the face of his advice in episode four as she and Vitali Kozmin salsa-ed to Night Fever from Saturday Night Fever. “Nothing was tucked in,’ she says. “It was set free”. Her award is leaderboard topping 26.

Also very much blazing a trail, bad boy actor – as we are statutorily obliged to refer to anyone who ever appeared in Love/Hate – Johnny Ward remains a frontrunner. He displays a softer side swaying, with Emily Barker, to a Viennese Waltz and Batman Forever’s Kiss From A Rose. He even sports a superhero cape. Holy dark horse – we might just have a contender.

You Have to Make Your Own Fun Around Here: Lively debut novel
10