Joe Duffy: ‘If Nigel Farage found an Irish granny he could become an Irish citizen’ 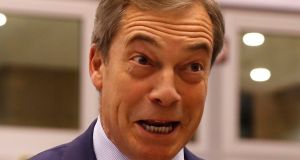 Joe Duffy could have added that two of Farage’s children are entitled to citizenship here through their Irish-born mother Photograph: Alastair Grant

After listening to the news that nurses are striking for better pay at the same time that the State is set to build the world’s most expensive maternity hospital, Ireland mightn’t seem the most attractive place to call a homeland.

So it’s a testament to the strength of the interminable Brexit omnishambles gripping our island neighbour that record numbers of British are looking to become Irish citizens. “I’ve never seen so much political chaos,” says Andrew, a caller to Liveline (RTÉ Radio 1, weekdays), as he explains to Joe Duffy why he wants an Irish passport. “I’m basically embarrassed to be British.”

But before chests start swelling with national pride, or at least schadenfreude, Andrew adds a downbeat caveat. (This is Liveline, after all.) He tells Duffy that he has been living and working in Ireland for 26 years, has an Irish wife and an Irish son, yet the process of naturalisation will cost him in excess of €1,100.

Andrew contrasts this situation with that of UK citizens who (unlike him) have an Irish grandparent and can get a passport for a 10th of the price, though they have “no intention of moving to Ireland or even travelling here”. Duffy is more succinct about the rationale of such people: “They’re getting it for priority boarding.”

I always knew I could do the best for a child in America, but here, we’re constantly firefighting, everybody is overstretched

It is, as Duffy notes, an interesting anomaly. It also appears to be a pretty widespread one. Steve, here for 35 years, and Alan, here for 45, both think it unfair that residents who have contributed for so long should have to undergo such an arduous naturalisation process. Even then, the outcome is uncertain.

On Wednesday, Mandy recounts the citizenship process for her English-born family, who have lived here for 20 years. After much outlay and sharing of bank details with officialdom, Mandy, her husband and her middle daughter got Irish passports: her other two daughters, Irish-raised but studying in Britain, were refused.

It all underlines the fact that for all the high-sounding rhetoric about free movement and openness, Irishness is, for official purposes, still founded on birth and blood. As Duffy impishly notes, “if Nigel Farage found an Irish granny he could become a citizen”. (He could have added that two of Farage’s children are entitled to citizenship here through their Irish-born mother.)

No wonder Andrew sounds wistful as he explains why he hadn’t previously applied for Irish citizenship: “We were all Europeans at that stage.”

Gabrielle Colleran has a different dilemma. A consultant paediatric radiologist who gave up her hospital post in Boston to come back and work in Ireland, she occasionally wonders why she returned home, such is the state of the health system here. As she tells Mary Wilson on Drivetime (RTÉ Radio 1, weekdays), “I always knew I could do the best for a child” in America, but “here, we’re constantly firefighting, everybody is overstretched”.

Colleran is on the show to discuss the high number of unfilled consultant posts. She says that even at full capacity, Ireland has 40 per cent fewer specialists than the European average, but the current shortfall means that doctors are overworked and even working in posts for which they are untrained.

“When we’re exhausted, there’s always the danger that we could miss something subtle or small,” she says, describing a daunting schedule of her own.

Meanwhile, thousands of children remain on waiting lists, “because we don’t have enough doctors to see them”.

Under Wilson’s usual fastidious guidance, Colleran’s focus remains firmly on the high-stakes problems faced by consultants: it’s odd and even jarring that she never mentions the nurses’ strike, despite it being the week’s biggest domestic story.

But while public perception may sometimes deem consultants the well-remunerated officer class of the health system, particularly in comparison to the plucky frontline nurses, Colleran highlights the human strain of her job.

“It’s a huge personal cost to my family,” she says, before recalling how her daughter berated her for not being around enough. “How long can I continue to sacrifice being a good mother for trying to be a good enough doctor?” Colleran asks, her voice choking up.

Wilson sensitively calls time on the interview, but she knows the key point has been made. When even supposedly elite members of the medical profession are under such stress, it’s no wonder the health system seems close to breaking point.

Yet, as Tom Dunne notes on Off The Ball (Newstalk, Monday-Sunday), the care he received from hospital staff while recovering from a recent heart operation was “amazing”. “They would just come in, full of reassurance and confidence,” Dunne recalls, his admiration palpable.

Hearing the music presenter discuss his health on a sports show may be unusual – as host Joe Molloy explains, the programme is running a week-long blood donation campaign – but as Dunne explains, he was in danger of never being heard again. Late last year, he was informed after a check-up that he was at severe risk of dying from cardiac arrest unless he had major surgery.

Since returning to the air two weeks ago (on the Tom Dunne Show, Newstalk, Monday-Friday), the presenter and Something Happens singer has been gradually settling back into his trademark wryly affable on-air persona on his nocturnal slot, mixing deftly chosen tunes with music and screen interviews.

Speaking to the thoughtful Molloy, however, Dunne sounds reflective and even fragile. He talks about his physical scars – “you feel deformed” – while he still can’t talk about the “horrific” nightmares he had during the six days of unconsciousness following his procedure. “It’s been a lot to take on board,” he observes.

But while the interview has its downbeat moments, Dunne is in no doubt of his good fortune. Physically, he feels better than ever, while being able to listen and play music again is a “dream” – a good one, this time.

“I really appreciate my life, I feel very privileged,” he says. “It’s like winning the lottery.” Amid all the turmoil elsewhere, Dunne’s return to the airwaves is a much-needed bright spot.

Radio Moment of the Week: Kenny gets heated by Currie

Kenny is audibly annoyed by Theresa May’s U-turn on the backstop agreement, but not only is Currie favourable towards the move, she berates the host for his attitude. “Calm down, Pat,” she urges, during heated exchanges. After the interview, Kenny does his best to do so, but doesn’t quite succeed.

“The one good thing about talking to Edwina Currie is that she makes me feel young,” Kenny says, “because she patronises me like a child.” Clearly, the Currie disagreed with him.