Black Mirror makes a bold and surprising return to form

Review: The first of three new episodes in Charlie Brooker’s series is by far the strongest 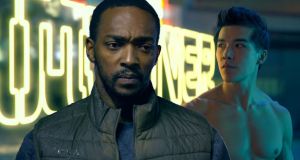 How much more does Black Mirror (Netflix, now streaming) have to reflect on? When Charlie Brooker’s brilliantly unsettling tech-fi began, late in 2011, it didn’t need to look too far to find everyday fears to magnify into dystopian plots, announcing itself with an auspicious first series, then a stronger second.

Since its migration to Netflix, bringing bigger budgets and longer series, there have been some streaming standouts, such as USS Callister, but more episodes larger in ambition than payoff. As with The Twilight Zone, the show’s clearest antecedent, it’s hard to be anxious all the time.

Maybe that explains why the fifth series has acquired a subtly different outlook. Its first and strongest episode, Striking Vipers, is a bold and surprising return to form.

Starting out with a familiar scenario – a male friendship, nicely portrayed by Anthony Mackie and Yahya Abdul-Mateen II, measured out in violent video games – the show takes things up to the next level. That this initially comes through magically upgraded tech shouldn’t comes as a shock, absorbing them in stalled middle age, cloudy-eyed and vegetative, onto the vibrant plane of virtual reality.

But that their fighting avatars, one female and one male, are soon spun into physical intimacy of another kind is as surprising to them as it is to us, first bewildered and unsure, soon hot and heavy.

It’s certainly a subversive and stylish take on the porous quality of identity in an age of infinte possibilities.

In contrast, a nervy follow-up, Smithereens, starring the delectable Andrew Scott as a frazzled ride-share driver, plays out like a standard bottle episode – Taxi Driver meets Uber, if you like. Low on spectacle, high on emotion, it has Scott’s desperate Everyman remonstrating with a godlike Zuckerberg-type (Topher Grace in a man-bun) against social-media slavery.

The concluding episode is more memorable for being such a contentedly goofy departure from form: an honest-to-blog teen adventure caper starring Miley Cyrus as a reluctant teen idol, brought into the orbit of two misfit sisters through the mediation of a sentient doll that possesses her consciousness. (None of that is quite as head-spinning as the sight of Cyrus mewling out a Nine Inch Nails songs.)

The cast throughout is impressive and the telling slick, but its hardly vintage Black Mirror. Perhaps Brooker, whose resonant ideas about upgraded tech and degraded humanity have been widely hailed as prophetic, would prefer to write about more than dark forecasts.

At just three episodes, a return to its modest original form, even Black Mirror knows it could do with less screen time.