Netflix: The 9 best new films and shows to watch in June

Black Mirror and Jessica Jones return, Tales of the City and The Black Godfather debut

The new season of Black Mirror is to set to launch on Netflix on June 5. Video: Netflix 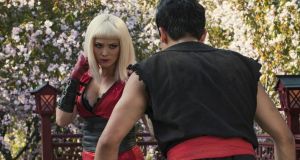 Season five
Wednesday, June 5th
Charlie Brooker’s dystopian anthology returns with three new future-shock mini-features. Miley Cyrus stars as a despondent pop star in Rachel, Jack and Ashley Too. In Smithereens, Andrew Scott is an Irish taxi driver in London, haunted by a traumatic event in his recent past. And Striking Vipers features Anthony Mackie (Avengers) and Yahya Abdul-Mateen II (Aquaman) as estranged college pals who reunite – with potentially disastrous consequences for humanity. Brooker has across recent seasons departed from the Black Mirror world view that technology is terrible and our smartphones are sending us all to hell (see series three’s San Junipero and season four’s Hang the DJ). But, following Christmas’s chose-your-own-adventure departure, with Bandersnatch, he now reverts to first principles, with a generally doomy new run harking back to Black Mirror’s bleak early years on Channel 4 (when it similarly featured just three episodes a season).

Season three
Friday, June 7th
A howl of strife went out when it was announced that this action show, starring Kiefer Sutherland as the “accidental” president of the United States, had been cancelled by ABC. But Netflix has swung to the rescue. And so Sutherland returns as Thomas Kirkman, a minor politician elevated to the Oval Office when terrorists blow up the Capitol Building in Washington. Completely preposterous and ludicrously watchable.

Season three
Friday, June 7th
One of Netflix’s earliest forays into foreign-language original content, the Brazilian dystopian saga has won a cult worldwide fan base. In the far future, society is divided into haves and have-nots, with the lower orders vying for the right to join the elite in their luxurious walled-off communities. A bit like trying to find accommodation in Dublin, only far less apocalyptic.

Armistead Maupin’s Tales of the City

Grown-up entertainment chronicling life and love, etc, from the perspective of everyday citizens in San Francisco. The original novels, and the subsequent mini-series, were a sensation, and the Netflix sequel benefits from the return of Laura Linney as Mary Ann Singleton, a character she last played in 1993. She is joined by Ellen Page as her daughter Shawna. Belt up for generational strife and slow-burn drama that addresses the big questions about fate, thwarted dreams and what we do and don’t owe the people in our lives. Probably not what you want if you’re looking for the next Game of Thrones.

Wednesday, June 12th
If there’s one thing Martin Scorsese loves more than casting Robert De Niro as a mobster, it’s lionising the rock’n’roll greats of yesteryear. His latest hagiography celebrates Dylan’s mid-1970s phase, as the gnarly troubadour sought to leave behind his incarnation as hippy truthsayer and carve a new space for himself and his music. Other details are sketchy – Netflix says the documentary “captures the troubled spirit of America in 1975 and the joyous music that Dylan performed during the fall of that year”.

Supernatural teen drama in Arabic about a group of schoolkids who unwittingly unleash a jinn – genie to you or me – on a trip to the ancient city of Petra, in Jordan. “When a girl accidentally releases a jinn in the form of a teenage boy, they learn that they’ve also unleashed an ancient darkness that threatens the world,” Netflix says. It’s just a guess, but the jinn probably won’t be bright blue and played by a winking Will Smith.

Season three
Friday, June 14th
As Disney gears up to take on Netflix, the streaming giant has canned all its Marvel shows (Marvel being owned by the House of Mouse). But while that means no more Daredevil or Luke Cage (boo!) there is still time for one final season of Jessica Jones (hurrah!). Krysten Ritter returns as the sardonic superhero whose greatest power may be her ability to sigh and roll her eyes while all around people are losing their heads.

Season three
Monday, June 17th
Jack and Harry Williams’s Amsterdam-set thriller was titled Baptiste when it debuted on ITV earlier this year. For Netflix it has been retconned as the third part in the Williamses’ Missing saga. Not that any of that matters. What’s important is that it’s another opportunity for the great Tchéky Karyo to reprise his role as retired French sleuth Julien Baptiste. In Amsterdam he investigates the case of a missing prostitute while Tom Hollander runs around in the background, looking as if his eyes might pop out of his head at any moment.

Season two
Friday, June 21st
On your bike, Stranger Things. When it comes to brain-blending time travel featuring annoying teenagers in a small town, this German sci-fi thriller wins all the prizes. Season one was beautifully baffling. With luck the second series will bring clarity – although not so much clarity that it ruins the fun.

The movie quiz: Which Jaws warned against going back into the water?
10

The appeal of Phil Collins? It's his friendly, happy face
Real news has value SUBSCRIBE